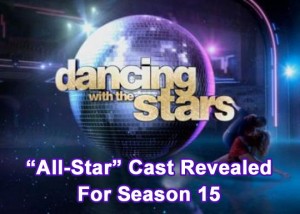 Dancing With The Stars is set to return for its 15th season (that’s right there have already been 14 seasons of this show!) on September 24th, 2012.  The 12 celebrities have been selected with a 13th still to be chosen by the public on August 27th.  Each of the 12 celebrities taking part in this season are returning from previous seasons and there are 6 winners out of the bunch, which means this season will definitely be one to remember.  They might as well have called this season Dancing With The All-Stars.

You can already bet on which celebrity will win the competition at BetOnline.com or SportsInteraction.com, two of the top rated online bookies we recommend here at BetOnIt.org.  Each sportsbook offers different odds for the action, which we will outline below, but another difference that you should not is that BetOnline.com accepts American bettors, while Sports Interaction does not.

Let’s take a quick look at each of the competitors and their odds to win this All-Star version of Dancing With The Stars.  We will start with the favorites.

Apolo Anton Ohno – Olympics Gold Medal Speedskater +400 @ SportsInteraction.com – Apolo won season 4 of Dancing With The Stars with Julianne Hough and posted an average score of 27.5 while doing so, which is the third highest average among the competitors for this season.

Shawn Johnson – Olympics Gold Medal Gymnast +550 @ BetOnline.com – You would think that gymnastics and dancing go hand in hand and Shawn proved this theory correct when she won season 8.

Emmitt Smith – Retired NFL Running Back +550 @ BetOnline.com – Smith showed his athleticism in different ways throughout season 3, leading to his eventual win.  Does the 43 year old football player still have what it takes?

Helio Castroneves – Indy 500 Champion Driver +600 @ SportsInteraction.com – Helio won season 5, showing that even outside of his car he has the moves.

Drew Lachey – 98 Degrees Band Member +800 @ SportsInteraction.com – Drew is the biggest favorite of the non-athlete celebrities to win this season of Dancing With The Stars. He did win the second season with some very high scores as well.

Joey Fatone – NSYNC Band Member +900 @ SportsInteraction.com – Another boy band member is the 6th favorite, but the biggest favorite of those who did not win their season (he came second).

Gilles Marini – Actor +900 @ BetOnline.com – Here is another contestant who did not win his season being given a fairly good shot at season 15.  It is important to note though that Marini’s average scores are the highest of all contestants in this season, but he just lost out to Shawn Johnson in the finals of season 8.

After these 7 competitors the odds lengthen quite a bit, which means that the oddsmakers think that these are the 7 front runners to win season 15 of Dancing With The Stars.  A noticeable absence from these favorites is Kelly Monaco, seeing as the other 5 first place finishers are the top 5 favorites.  Kelly won season 1, but her odds are +4000 at Sports Interaction.

Visit BetOnline.com or SportsInteraction.com to see the full list of odds for Dancing With The Stars Season 15.

How To Bet On Dancing With The Stars

Placing your dancing with the stars bets is very easy.  Just follow these few steps and you will have your bet placed and ready to cash in if your contestant pulls off the win.

After you’ve created an account you will need to make a deposit.  Select the cashier/deposit button and choose from the many banking options to make your deposit.  I suggest also checking out the first deposit bonus available at either site.

Now it’s time to bet.  Here is how you find the Dancing With The Stars bets at either site.

At BetOnline.com you should click on ‘Futures & Props’ at the bottom of the left sidebar.  Then click on ‘Entertainment’.   This will bring up the Dancing With The Stars Season 15 betting odds.

At Sports Interaction click on ‘Specials’ from the left sidebar, followed by ‘Entertainment’.

Place your bets and away you go.  Now you have more riding on each episode of Dancing With The Stars.  Keep up with the show on the Wikipedia page!

Tagged With : Competition • Dancing With The Stars • Reality Show • Television