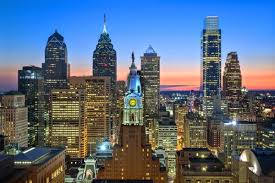 Philadelphia is the sixth largest city in the United States and home to a major league team in each of the four dominant sports leagues in North America.  The Phillies of the MLB are the most recent team to bring a championship to Philadelphia, nearly a decade ago.  The Eagles, Flyers and 76ers have had success in the past, but it’s an ever increasing distant memory for these teams, each of which has gone over 3 decades without a title.  This lack of championship success has not stopped Philly residents from proudly supporting their teams in recent years, nor has it stopped the ever increasing rise of sports betting among city residents.

Is Sports Betting Legal in Philadelphia?

If you live in Philadelphia and you place sports bets online you will not get arrested.  So in that respect it is legal for Philadelphia residents to bet on sports online.

What isn’t legal is operating a sportsbook within the state of Pennsylvania.

That said, the popular online sportsbooks that accept American residents, including those from Philadelphia, are licensed and regulated outside of the United States, which allows them to continue to run while accepting Americans at their sites.

***I do suggest that you only place bets through established, popular sports betting sites that accept Americans, like the two I will outline below.

These are the two most popular, reputable and well established betting sites that accept American players.

Bovada has become by far the most popular online sportsbook in the United States and they continue to provide a great product for their American players.  Check out our full review here.

Unfortunately, offline sports betting is not allowed in the state of Pennsylvania.  That said, Pennsylvania does allow you to place horse racing wagers at racetracks in the state and there just so happens to be two high quality race tracks in Philadelphia.

Harrah’s Philadelphia hosts live harness racing on their 5/8 mile track located at the Harrah’s Casino in  the south-west of the city.  Harrah’s offers live betting on their harness races, as well as simulcast betting on thoroughbred and standardbred races 7 days a week.  On top of the horse race betting, Harrah’s also has a full casino on the premises, as well as plenty of shows on site to keep patrons entertained.

Bovada also accepts bets on the harness races that take place at Harrah’s.

Parx Racing and Casino is a large horse racing and casino complex located in the north-east of Philadelphia.  The Parx Racing facility has become a prominent track in Pennsylvania and hosts two premier Thoroughbred races each year with the Grade I Fitz Eugene Dixon Cotillion Handicap and the $1 million Grade II Pennsylvania Derby both being run at the track.

In addition to the prestigious racetrack, the casino features 3500 slot machines, 140 live table games and 60 poker tables, which make Parx Racing and Casino the largest casino gaming complex in the state.

You can wager on every live race at the track, and you also have the option of wagering on simulcast action of all of the other top tracks in the USA.

Bovada and BetOnline both also take bets on the races that take place at Parx Racing and Casino.