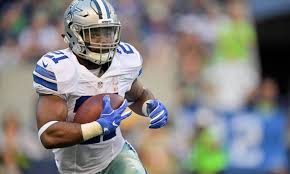 The Dallas Cowboys were one of the biggest surprises of the NFL season last year as the team went from a 4-12 the previous season to 13-3 last year. After drafting running back Ezekiel Elliot in the 2016 NFL Draft, pundits gave them a decent chance to make the playoffs. However, their playoff chances significantly decreased after quarterback Tony Romo suffered a back injury in the preseason.

When Romo got hurt, the Cowboys handed the reigns over to rookie quarterback Dak Prescott, but expectations weren’t high because many people didn’t believe the rookie could lead the team to the playoffs in his first season.

Prescott proved the doubters wrong and led the Cowboys to the best record in the NFC on his way to winning the Rookie of the Year award. The Cowboys fell short in the playoffs, losing to the Green Bay Packers, but with the young talent having some experience under their belts, Dallas is expected to be a force to reckon with this year.

In this article I’m going to look at the various futures bets you can make on the Dallas Cowboys 2017 season.  I’ll look at their Super Bowl odds, as well as their odds to win the NFC East, total wins and their week 1 game.

At +1200, the Cowboys have the third best odds of winning the Super Bowl after the New England Patriots (+375) and the Green Bay Packers (+750). Even though they might be the best team in the NFC, the Cowboys won’t be able to surprise teams like they did last year and the opposition has more game tape on Prescott than they did last year so defenses will adjust the way they play him this year. With the NFC being more unpredictable than the AFC, there is good value in betting on the Cowboys to win the Super Bowl.

In the NFC East, Dallas has to contend with the New York Giants, who won 11 games last year and also made some improvements in the offseason. The Washington Redskins should be back in contention for the division as well as Carson Wentz and the Philadelphia Eagles also aren’t too far behind them in terms of talent.

The fact that all four teams have won the division title at least once since 2011, shows just how competitive the NFC  East, which means the Cowboys aren’t guaranteed to win the division.

Last season, Dallas won 13 games, thanks in part to a favorable schedule. But as previously mentioned, opponents have more game tape and will be prepared for them this season. Their schedule is also tougher than it was last year. I expect the team to regress a little this year but I see them winning at least 10 games.

The Cowboys open op the season at home against the New York Giants. The point spread for the game is -5 in favor of Dallas. The over/under for total points scored is 49.9 at -110.

Dallas lost both games against the Giants last season, and three of their last four overall. Since this is a rivalry game, I expect the score to be close. Take the Giants on the spread and the under on the total points scored.

What are your thoughts on the Cowboys this upcoming season, do you think they have what it takes to win their first Super Bowl in over two decades?  If you’re new to betting on football I suggest checking out our NFL betting information page to brush up on the various wagers you can make.