Bet On Belgium vs Algeria – Odds and Pick 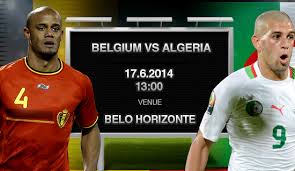 Belgium vs Algeria is expected to be a one sided game with Belgium being the big favourite in group H and Algeria expected to be the basement team.  That’s just on paper though and as we know from Costa Rica’s shocking win over Uruguay anything can happen in a World Cup match.  There are no guarantees and the Belgians will have to prove that this truly is their golden generation.  There are a lot of high expectations on this team as they were the fifth favourites to win the World Cup according to the oddsmakers after Brazil, Argentina, Germany and Spain.  Will this relatively young team with a ton of talent be able to impose their will on Algeria?

Here are the 1×2 odds for the Algeria vs Belgium match from the best sportsbooks online the internet:

As expected Belgium are big favourites in this match.  This is a big match for Belgium to win if they hope to finish atop the standings.

I do like Belgium to win this match.  They have an elite scorer in Romelu Lukaku and in their two most recent tune up matches Belgium was able to get wins over Sweden (2-0) and Tunisia (1-0).  They are a top team from Europe and the European teams have performed well so far in this World Cup, with the climate and culture not seeming to play a huge factor on the field.

Algeria also won their most recent two tune up matches for the World Cup, with a 3-1 win over Armenia and a 2-1 win over Romania.  That said these teams are not in the same class as Belgium.  Belgium absolutely destroyed their World Cup qualifying group, which included Croatia and Serbia, two strong teams, the first of which looked very good against Brazil in their opening match and could have easily came away with a draw if it wasn’t for some questionable calls from the ref.

This might be a more difficult game that anticipated, but I do think that Belgium will find a way to win.  Algeria will have their chance to get a win in Brazil against a Korean team that looks very weak in their second game of the tournament.