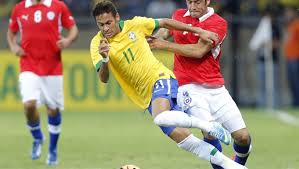 Chile and Brazil face each other in a very interesting all-South American round of 16 match this Saturday.  The winner will advance to the quarterfinals and play the winner of Colombia and Uruguay in another all-South American match, but that one will have a place in the semi-finals on the line.  I think it’s kind of funny how one entire quarter of the knockout stage draw will consist of South American teams.

Brazil has looked ok in their group stage games, but they were in a fairly soft group with Mexico, Croatia and Cameroon, so it’s hard to say how they will perform against Chile, who will be their biggest test yet.

Chile came second out of Group B after beating both Australia and the defending World Cup champion Spain.  They lost the final group game against the Netherlands, which is why they are now forced to take on Brazil in the elimination rounds.

The oddsmakers think this is a much more one sided game than I am expecting.

Here are the odds for the match, both the 3-way line and to qualify for the quarters.

To be honest I haven’t been overly impressed with Brazil.  I’ve watched each of their games and even Neymar hasn’t impressed me too much.  He is a talent, but against a stronger defensive team I don’t see him being as effective.  Both of his goals against Cameroon were caused by shoddy defending and one of his goals against Croatia was a penalty shot.  In fact I think the Croatians were somewhat robbed in that game based on that questionable penalty and then a foul on the Croatian player when they could have equalised late at 2 all.

Against Mexico the Brazilians had slightly better chances, but that’s not to say they controlled the play.  That game probably deserved to be a draw.  And then Cameroon simply isn’t on the same level as any of the teams in that group, but they still managed to score against Brazil on some very lackluster defending.  Overall, I just don’t think Brazil is as good as everyone is making them out to be.

I see them as a small favourite in this game, but the oddsmakers have them almost certainly advancing to the quarterfinals.

The smart money has to be on Chile here.  This Chilean side easily handled Australia before also beating Spain in impressive fashion.  They were deadlocked with the Dutch until late in a game that probably could have gone either way.  I don’t think Chile gets the respect they deserve on the International level, but a win over Brazil will put them in the global eye.  This will be a good game that I truly believe could go either way.

For this reason the smart money is on the Chileans.