The Dallas Cowboys will be trying to avenge their only loss of the season when they travel to New Jersey to take on their NFC East rivals, the New York Giants, this weekend. The game is scheduled to begin at 8:30 PM. ET.

The Cowboys have been the biggest surprise this season and have the best record in the NFL. Before the season started, there were high expectations for the team after drafting running back Ezekiel Elliot. However, a preseason in jury to quarterback Tony Romo tempered the expectations. 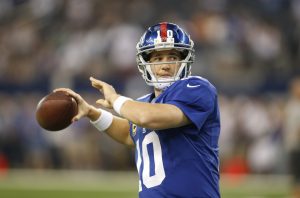 In Romo’s absence, the team decided to go with rookie Dak Prescott, who has led the team to the best start in franchise history. The coaches and staff are so impressed with the way Prescott has played in Romo’s absence, and now there are rumors the veteran quarterback will be traded in the offseason.

The Giants also entered the season with high expectations after spending a lot of money to improve their defense, which was their biggest weakness last season. After winning their first two games, the Giants dropped three consecutive games, and looked like they were headed for another losing season.

The Giants were eventually able to turn things around, and won six consecutive games before losing to the Pittsburgh Steelers last week.

Most of the credit for New York’s success can be attributed to their improved defense and the play of Eli Manning, who is often criticized for throwing interceptions at the worst possible time. This season, Manning has cut down the turnovers, and is having the third best statistical season of his career.

Pro Bowl receiver Odell Beckham Jr. has also been instrumental in helping the Giants win, and is in the midst of the best statistical season of his career. The return of Victor Cruz from an injury that forced him to miss the entire 2015 season has also helped the offense immensely.

While the Giants were able to address their defensive issues, they failed once again address their running game, which is the second worst in the league. Without an effective running game to complement their passing game, the Giants offense has been one dimensional this season, which is something that will haunt them down the line.

Dallas will once again try to control the clock by giving Elliot the ball early and often. Head coach Jason Garrett will also dial up some blitzes to keep Manning on his toes all game and try to force him to turn the ball over.

With star defensive player Jason Pierre-Paul not expected to be available, the Giants will have to figure out how to get to the passer without leaving their secondary vulnerable, which means there will be a lot of disguised blitzes coming from New York’s defense.

With the NFC East title all but wrapped up for the Cowboys, the Giants best chance of making the playoffs is by being one of the Wildcard teams, which means they can’t afford to lose this game.

On Paper, the Cowboys are the better team, but they are playing a rivalry game against a rival that has already defeated them at home this season. The Giants also need this game more than Dallas does, so I’m picking them to win as home dogs.