The biggest game in the NFL this weekend will be the rivalry game between the Denver Broncos and Oakland Raiders, two AFC West rivals. The game will take place at the Oakland Coliseum, and is scheduled to begin at 8:30 PM. ET.

Over the past decade, the Broncos have dominated their rivalry with the Raiders, who haven’t had a winning season since they went to the Super Bowl in 2003. However, the Raiders seem to be back and are currently tied with the Broncos at the top of the division. 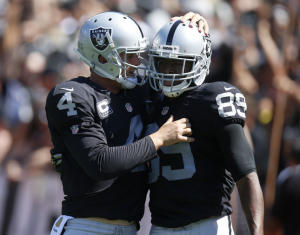 Derek Carr had a monster week 8 against the Bucs. Although he won’t put up those same numbers against this Broncos D, even just a couple TD’s should be enough to win this game.

After losing Peyton Manning to retirement, the Broncos knew they would have growing pains on offense after they were unable to sign a veteran signal caller during the offseason and turned the offense over to second year man Trevor Siemian.

Despite not having any starting experience, Siemian has led the Broncos to a 6-2 record. He has had his share of growing pains since he took over as starter, but he has also shown enough great decision making skills and hasn’t made too many mistakes that have hurt the team.

Siemian and the offense have also been helped by the defense, which is still one of the best in the league. Despite their success, the Broncos will have their hands full with a young Raiders team that doesn’t seem to be intimidated by the Super Bowl champions.

The Raiders have been the laughing stock of the NFL for over a decade, but over the past few years, the team has been slowly building the foundation for success. The team drafted quarterback Derek Carr in the second round of the 2014 draft, and added receiver Amari Cooper last year. During that span, the Raiders also added a few pieces on the defensive end and now have one of the best defenses in the league.

After some growing pains, the Raiders are now winning again, and are hoping to make their first trip to the playoffs since 2003.

Derek Carr, who is coming off his first 500 yard passing game, should be able to put up some yards against the Broncos, who will be without starting cornerback Aqib Talib, who is expected to sit out the game with a back injury.  Carr will need his offensive line to play at their best because they will be dealing with the best pass rush in the league, and Carr will have trouble finding open receivers if he is constantly under pressure.

Even though this is the first meeting between the two teams this season, it has big playoff implications because the winner will be in sole possession of the AFC West lead, and one game behind the New England Patriots for home field advantage in the playoffs.

The Broncos have the better defense, but the Raiders have been waiting a long time to stick it to Denver, so I’m picking Oakland to win the game.