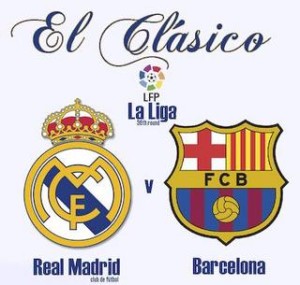 With the dust hardly having settled on Tuesday night’s encounter between Spanish football’s heavyweights, it is already time to look forward to the next installment of the Real Madrid – Barcelona show. Barcelona travel to the Santiago Bernabeu on Saturday with their Copa Del Rey dismantling at the hands of their fiercest rivals fresh in their minds and seemingly with a point to prove, and in the face of mounting pressure, the likes of which they have not encountered since their domination of European football began almost a decade ago. Barcelona sit fairly comfortable 16 points ahead of their Madrid rivals in La Liga, and it is largely believed that the title battle is all but over, but with pride to play for, El Clasico will never be a game that these two teams take lightly.

Bet365.com is the best place to bet on El Clasico, and offers a wide range of match selections and markets, including exciting in play options so that you can have a punt as the games progress. Below we look at the early offerings from Bet365.com for the game.

The recent criticism aimed Barcelona is based equally on the negative results of the last few weeks as it is on incredulity at their actually being capable of bring outplayed twice in two weeks. It is still early to speak of crisis. It is still too early to speak of an end of a generation. It is still too early to say that their game plan has been worked out. Make no mistake: this Barcelona side is the best that this generation has seen. Which is perhaps best reflected in them being the bookies’ favourite going into the game despite last night’s defeat.

However, this criticism is not without merit. Barcelona have now conceded in their last 12 games, a statistic that has been exposed by their attack’s lack of incisiveness in the defeats by Milan in the Champions League and Real last night. Stand-in coach Jordi Roura said after the Real game that ‘there is no point in dramatizing,’ but the ease with which the Real counter attack sliced through the Barcelona defence, most noticeably in the events that lead to the first two goals, will bring Roura headaches leading up to this game.

An added element for Saturday’s clash is Real’s return trip to Manchester United in the Champions League next week, giving Mourinho the choice of either keeping his best players in the starting XI in order to keep his side’s momentum going, or to rest some of his charges ahead of their trip to Old Trafford. With their league hopes dim, and the great squad depth at his disposable, it will be understandable should a little turnover occur on Saturday. Whatever the case, a talented side will take the field this weekend.

Cristiano Ronaldo’s brace brought his tally against Barcelona to 12, still 5 behind Messi, who missed training on Wednesday due to fever but is expected to be ready for Saturday’s game. With Real’s game plan being channelled through the Portuguese star, he is a favourite to head the goal scorer markets. Since taking over at Real in 2010, Mourinho’s side has only achieved one clean sheet in games against the Catalans, and goals will again be expected on Saturday, with three goals or more paying out at -175.

Lionel Messi looked isolated in last night’s semi-final, and David Villa, who scored last weekend, is being tipped to start up front in his support, meaning Iniesta will likely drop into the midfield in the place of a rather quiet Cesc Fabregas and take his place alongside Xavi.

Bet365.com is the best place to go for all soccer betting for all the leagues in Europe and for El Clasico. There you will find the best odds when it comes to football games and markets as well as in-play options to play as the action takes place.