Bet On Rory MacDonald vs BJ Penn UFC on FOX 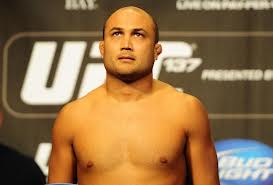 BJ Penn is back from over a year off to fight in the one of the big events of this UFC on Fox event.  His opponent will be Rory MacDonald, who is an up and comer in the sport and the favorite in this fight with BJ Penn.  It’s always interested to see which BJ shows up.  When he is on his game and motivated he is nearly unbeatable, but his career has been marked with sub par performances and losses to fighters many expected him to defeat.

The fight isn’t for another couple weeks, but it is the next big fight in the UFC and the odds are up at all of the online sportsbooks so you can place an early wager on this one.

Those are the odds taken from online sportsbook 5Dimes.eu, one of our recommended online bookies.

Rory MacDonald is a big name in the UFC welterweight division at only 23 years of age.  He lost to Carlos Condit (who was the UFC welterweight interim champion until losing to GSP this past weekend) back in June of 2010, but he has won his 3 fights since then defeating Nate Diaz by unanimous decision and following that up with TKO’s of Mike Pyle and Che Mills.

BJ Penn will be MacDonald’s biggest name since losing to Carlos Condit a couple years ago and it will be a huge fight in cementing MacDonald as one of the top contenders in the welterweight division.

BJ Penn is a bit of an enigma in the sport of MMA.  He is (was) one of the biggest names in the UFC, owning the welterweight title and lightweight title at points in his career, but he has just at 16-8-2 record in the UFC, which isn’t very impressive.  That said he almost always would fight against the top fighters in the UFC.  He has only one win in his last 5 fights (1-3-1), with two losses to Frankie Edgar and one to Nick Diaz in that time frame.  Also a draw with Jon Fitch and a win over Matt Hughes.  That being said Penn wasn’t finished in any of those fights.

I personally think if Penn is motivated he has a good chance at winning this fight.  Rory MacDonald has never defeated as talented a fighter as BJ and it will be a huge test for him this time around.

How To Bet on MacDonald vs Penn

As mentioned earlier we suggest visit 5Dimes.eu, opening an account by clicking on the blue ‘Register Today’ button in the right sidebar and filling out the form.

Then after you have made a deposit you can click on the ‘UFC’ box in order to see the upcoming UFC betting odds, which will include the Penn vs MacDonald fight.

One thing I know for sure is the fight will be entertaining.  It could lead to the end of Penn’s career or possibly the beginning of a title shot for MacDonald.  Either way this is a huge fight.  Visit UFC.com to learn more about the fighters.

Tagged With : Bet On BJ Penn • bet on Rory MacDonald