Two NFC West rivals will meet on Sunday night when the Seattle Seahawks take on the Arizona Cardinals at the University of Phoenix Stadium in Arizona. The game is scheduled to begin at 8:30 PM. ET.

After winning the NFC West last year and finishing with the second best record in the conference, the Cardinals were one of the favorites to win the Super Bowl this season, but so far, the team has under achieved.

The Cardinals opened the season with a surprising loss to a short-handed New England Patriots team, then dropped questionable games against the Buffalo Bills and the Los Angeles Rams. However, the team seems to be back on track after two consecutive wins, and will be trying to build on their recent success when they face the Seahawks. 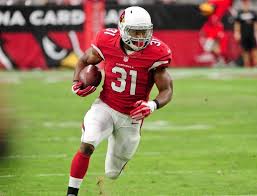 David Johnson has been on fire lately and he should be a big factor, even against this tough Seahawks defense.

The Seahawks are 4-1 and sitting on top of the NFC West. Despite the record, the Seahawks haven’t looked like the same team that dominated the NFC for three consecutive seasons, and needed to be bailed out by the referees last week to defeat the Atlanta Falcons.

The Seahawks also lost to the Rams a couple of weeks ago, which makes this a big division game for both teams. A win by Seattle gives them a bigger division lead, but a win by the Cardinals reduces their lead in the division and gives the Cardinals the head-to-head lead in conference play.

The Seahawks have clearly missed Marshawn Lynch this season because their running game isn’t as consistent as it has been over the past few seasons. Quarterback Russell Wilson has been dealing with injuries and is doing the best he can, but the team needs to figure out how to protect him better and avoid a serious injury that will derail their season.

The Cardinals offense isn’t as explosive as it was last year, but they are still averaging 25.5 points per game, which is 10th in the league. The team has also had some success against Seattle in recent years, which is why they are going into this contest with a lot of confidence.

The Cardinals do have some concerns going into this game because they don’t know if quarterback Carson Palmer, who left their game against the New York Jets early, will be healthy enough to play against Seattle. If he isn’t, look for David Johnson to be a big factor in the game.

The Cardinals know they can’t afford to lose this game, which is why I’m picking them to win this game.