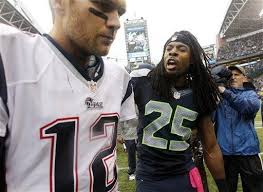 There are so many Prop Bets that have a great chance to payoff. All these odds come from Betonline.ag. Here are a few Prop Bets to consider:

There was not a single horse collar penalty this season. In big games, the referees tend to let the players play. This is a great line for a penalty that has not been seen so far in the playoffs.

Team With Most Penalties in the Game: Seattle Seahawks -120

Seattle plays a very aggressive style of play. They are a very physical defense that draws a lot of penalties. Last week, defensive end Michael Bennett went offside three times. The Seahawks had eight penalties last week, but the Packers had more yards despite having less penalties called.

The First Conversion for a First Down: Passing Play -160

Last week, both the Patriots and the Seahawks converted more first downs on the ground than through the air. Do not expect the same results this week.

Seattle had 20 first downs last week. In a controlled environment bet the over.
Total First Downs by New England: Over 20.5 First Downs -115
New England had 28 last week. Against the Seahawks, expect that number to fall, but they will at least have 22.

The Super Bowl has never gone to overtime. This game will go down to the final minutes, but with a chance to win in regulation, expect the team that is down to go for the victory and not settle for overtime.

While there has been a safety in Super Bowls involving both of these teams, (Brady intentional grounding from the end zone in 2012 and Peyton Manning in last year’s Super Bowl) the odds suggest betters need to roll the dice that it will not happen in back to back years.

Will there be a Successful 2-pt Conversion: No -500

Against two defenses, where points are hard to come by, the need for a two point conversion will certainly come up. Russell Wilson’s ridiculous 2-pt conversion against the Packers is one thing, but do not expect another crazy sequence to occur.

While Brady and Russell Wilson are the two safe bets, Marshawn Lynch and Gronkowski are likely to have a huge impact on the game. The player that sticks out as the dark horse with the best odds is Julian Edelman. Edelman’s contribution on special teams gives him added value, but his intangibles on offense (the trick play against Baltimore) make him a sneak MVP pick.

Again, all these odds come courtesy of Betonline.ag.