Bet On The 2013 Capital One Bowl – Nebraska vs Georgia 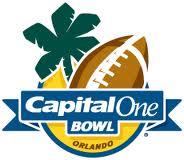 The 2013 Capital One Bowl is set to be played at Citrus Bowl field in Orlando, Florida on New Years Day.  The Capital One Bowl gets first selection for teams that aren’t in BCS games from the SEC and Big Ten.  This year that means that Nebraska (10-3) will represent the Big Ten, while Georgia (11-2) will play from the SEC (Florida and Alabama are in BCS Bowl Games).

Here are the spread odds from Bovada.lv, one of the best college football betting sites online.

Visit Bovada.lv to see all of the odds including the moneyline and totals.

Georgia had an amazing year, finishing with the #7 ranking in the country, so they deserve to be big favorites in this one.  Georgia won 11 games throughout the year and might have been playing the BCS National Championship if they were able to pull out a victory against Alabama on the first of December for the SEC title.  They lost that game by 4 points.  Georgia’s other loss wasn’t quite as flattering as they lost to South Carolina 35-7 in early October (South Carolina still finished with the #10 ranking in the country).  In their other games Georgia has shown an ability to put points on the board (they only scored less than 30 twice in their 13 games this year) and they defeated some good teams (defeated Florida 17-9 – now ranked #3 in the country).  The SEC is a legit Conference too with every team in it having at least a .500 record out of Conference including Kentucky who was 0-8 in the SEC.

Nebraska finished the season ranked #16 in the country with a 10-3 record.  Their losses came to UCLA and Ohio State, before losing to Wisconsin by a score of 70-31 in the Big Ten Title Game.  That said Nebraska did get some big wins this year.  They beat Penn State 32-23, Northwestern who is in a BCS Bowl Game 29-28, now #18 ranked Michigan 23-9 and Wisconsin earlier in the year 30-27.  But this Wisconsin win, followed by the subsequent loss gives me more worry.  Although Nebraska had a succesful season to this point they have given up a lot of points to good offenses (63 to Ohio State and 70 to Wisconsin).  Georgia has a very strong offense and I expect them to put up points in this one.  I just don’t think the Cornhuskers will be able to keep up either.

How To Bet on the Capital One Bowl

To bet on this game (I like Georgia -9), visit Bovada.lv now.  If you don’t have an account you can quickly set one up and make a deposit.  You will find the game under the ‘Football’ and ‘College Football Lines’ odds at Bovada.lv.