Bet On The 2013 Presidents Cup 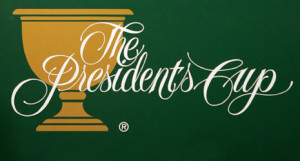 The tenth edition of the Presidents Cup takes place at Muirfield Village Golf Club in Dublin, Ohio, as the best American players meet the Internationals in an attempt to maintain their 15 year unbeaten streak in the international match-play competition second only importance to the Ryder Cup. The Americans have dominated this competition since its inception in 1994, with seven wins to the solitary International victory in Australia in 1998. The 2003 edition, perhaps the most exciting in the tournament’s history, ended in a tie. Those numbers reflect the dominance that the American sides have had over their rest-of-the-world counterparts, without even considering the rather comfortable margins of victory in the last four editions. This year’s edition looks to be following that same script, as a much stronger American side, at least on paper, will head into the four-day event as clear favourites. But there is enough talent in the International lineup to put up more than a mere perfunctory challenge, though the odds are stacked firmly against Nick Price’s team.

Bet365.com is the best place to bet on the 2013 Presidents Cup, offering you a wide array of match selections and markets, including exciting in play options that you can have a punt on as the event progress. Below we look at some of the most popular bets that Bet365.com has to offer.

The Fred Couples-captained American side (2/7 outright) appear to be much stronger on paper and on current form. Of the twelve men in the team, seven are ranked in the top 11 in the world, and ten in the top 25, with their lowest ranked player at 28th in the world. The International side (11/4 outright), on the other hand, have only one player ranked in the top 15 in the world: Masters champion Adam Scott, with just four in the top 25. The numbers get worse for the Internationals when season victories are taken into consideration: eight of the twelve Americans have been winners in 2013, with a total of 16 victories, compared to just two winners in the International ranks, Scott and Richard Sterne, who is one of five South Africans in the International side’s lineup this year. Others include recent major winners Ernie Els, Charl Schwartzel and Louis Oosthuizen.

The International side also includes past major winner Angel Cabrera, 21 year old Japanese starlet Hideki Matsuyama and Jason Day of Australia, so, all told, the individual talent is there; whether Price will be able to steer that talent into a competitive unit remains to be seen. Price, asked about the International side’s losing streak, was eager not to place too much pressure on his team, though he admitted that a strong performance was needed this week: “I wouldn’t say it’s a must?win. That’s a hard thing to put on anyone. But this one needs to be competitive, more important than anything else … because the last four Presidents Cups, you can argue either way, but I honestly believe they have not been that competitive.”

The US team will be out to prove a point after their stinging defeat at the hands of Europe in the Ryder Cup last year, and it will be difficult to bet against them. Tiger Woods, Phil Mickelson, Matt Kuchar, Steve Stricker, Jason Dufner, Zach Johnson, Brandt Snedeker, Keegan Bradley: it is difficult to see too many weak links in this team. Exciting 20 year old captain’s pick Jordan Spieth has had a great season, ranked 21 in the world, and will be keen to repay the confidence that has been placed on him by Couples.

The competition format is slightly different to the Ryder Cup, with all 12 players on the course each day of the tournament. Opening day will see six four-balls, followed by six foursomes on Friday, five four-balls and five foursomes on Saturday, before the 12 singles games on Sunday, which could see the tournament being decided in dramatic fashion should the Internationals be able to put up a good fight in the opening days.

The last three editions have been won by the US by margins of four points or more, and the handicaps present some interesting betting opportunities for punters. There isn’t much value in US wins, with 8/11 paying off a 3.5 point handicap, and 10/11 a 4.5 point head start for the Internationals. Those looking to back the Internationals will be keener to have a look at the Evens at +3.5, or higher if a closer contest than expected plays out. A 1.5 head start for the Internationals will pay out at 7/4. Another option is a US first day lead, which is being offered at decent value at present, 8/11.

Bet365.com is the place to go for the 2013 Presidents Cup. There you will find the best odds when it comes to golf betting markets as well as in-play options to play as the action unfolds.

Visit the official Presidents Cup website to keep up with the event.