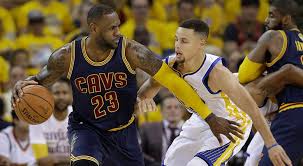 The Golden State Warriors and Cleveland Cavaliers will renew hostilities in the NBA Finals for the third year in a row.  This time around both teams absolutely cruised to the Finals, with the Warriors going 12-0 and the Cavs going 12-1 en route to winning their respective Conferences.  Of course some key injuries to Kawhi Leonard, Isaiah Thomas and Kyle Lowry helped make the road to the finals much easier for both teams.

That said, this is the Finals match up that was expected to start the season.  Golden State collapsed after holding a 3-1 lead over the Cavs in last years finals, but adding Kevin Durant for this season has helped make them significant favourites for the 2017 edition.

In this article I will be using odds from BetOnline.ag, which is one of our top rated sportsbooks for betting on basketball.

Here are the odds to win the series from BetOnline.ag:

As I mentioned above, the Warriors are the favorites heading into the series, but I would argue rightfully so.

I really like the Warriors to bounce back and get revenge over the Warriors this season.  First of all, I think the Warriors have improved since last year thanks to adding one of the best players in the game in Kevin Durant.  They also didn’t have to worry about their regular season games trying to break a record down the stretch this season so their focus has been solely on winning the NBA Finals throughout this entire season.

The Warriors actually have a new record that they could break this year by becoming the first team to go 16-0 in the playoffs en route to the NBA Championship.

With Curry, Durant and Thompson all playing big minutes and capable of getting extremely hot at any time I think it will be very hard to catch the Warriors on an off night, which is what I think the Cavs will have to do if they hope to pull off the upset.

The Warriors are playing great basketball at both ends of the court and are looking like one of the best teams every assembled in the NBA.

I personally think there may even be a better chance that the Warriors win via a sweep than lose this series.

I will likely be taking the Warriors to cover the spread in every game this Finals as well.  Learn more about the different NBA bets you can make on this series here.