Bet On The Milan Derby 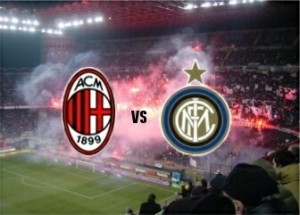 The Milan Derby will bring 2013 to a close in the Serie A, with two sides in need of points looking to head into the Christmas break on a good note. The game will be played under unusual circumstances, however, with the Curva Nord of the Giuseppe Meazza, home of the Inter ‘ultras’ to be closed, following offensive chants from the traveling Inter fans in Naples last week. The decision has angered fans and players alike, though the FIGC looks to stand its ground on the matter, in an attempt to clamp down on the unruly crowd behaviour that is slowly beginning to get out of hand in Italy. The action on the pitch will not be muted, however, as two teams with different motivations for winning clash on Sunday night.

Bet365.com is the best place to bet on the Milan Derby, offering you a wide array of match selections and markets, including exciting in play options that you can have a punt on as the games progress. Below we look at some of the most popular bets that Bet365.com has to offer.

Considering the contrasting log positions and the level of play displayed in this first part of the season, it is a little surprising to note that both Inter and Milan, the ‘away’ side for the game, have been put out at the same price of 13/8. A few factors may be possible for this; the crowd element mentioned above may play a part, coupled with the fact that, apart from the 4-2 defeat at Napoli last week, Inter haven’t won in four, drawing the preceding three games, and now sit seven points from third place – their seasonal objective.

Milan, having gotten off to a woeful start to the season, sit in tenth position, a full 24 points behind table-topping Juventus. They seem to be undergoing a mini-resurgence of sorts, however, being the only Italian side to have qualified for the second round of the Champions League, and fighting to a 2-all draw against undefeated Roma last weekend. This change in form coincides with former Italian Prime Minister and Milan President Silvio Berlusconi’s visit to Milanello, a move that sparked their change in fortunes last season.

Milan’s fifth worst defence in the league will have to contend with the league’s most prolific attack, however, and the Over 2.5 pays out at 3/4. The draw is at 23/10.

Walter Mazzarri’s men must go into the game as favourites, though, in what might be an important game for the tenure of Max Allegri’s at the helm of the Rossoneri. With their disappointing start to the campaign, the pressure has been heaped on the manager, with the Champions League qualification earning him a stay of execution, but further failure would not bode well for his future.

Bet365.com is the place to go for all football betting for all the leagues in Europe. There you will find the best odds when it comes to Milan derby markets as well as in-play options to play as the action unfolds.