Bet On Tim Tebow Props for the 2013 NFL Season 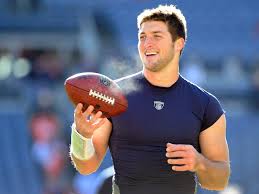 Tim Tebow has joined the New England Patriots and is currently attending the Patriots mandatory minicamp, which opened today.  This new signing has caused a media stir and questions of how Tebow will be used this year are being asked by a lot of people.  Two things can be struck down immediately.

1. Tim Tebow has not given up on his NFL career and will not be joining the CFL this season.

2. Tim Tebow will not be the starting quarterback for an NFL team out of camp this season.

Those two questions have been answered, but this signing has brought up many more questions, mostly surrounding how Tebow will be used by Bill Belichick this season.  Online sportsbook Bovada.lv has jumped on these questions and offered a few Tim Tebow prop bets that you can make for the NFL season.  Visit Bovada.lv to bet on any of the props listed below…

It seems pretty unlikely that the Patriots would have created the media circus of signing Tebow, just to cut him before the season.  That said stranger things have happened and if it becomes apparent that there really is no use for him on their team they could end the Tebow experiment before it begins.

Will Tebow start a game as QB for the Patriots in the 2013 Regular Season?

You have to think Brady would need to get hurt for this to happen.  And even if Brady gets hurt there is no guarantee that Tebow would be second in line for the QB role.

Will Tebow throw a Touchdown Pass in the 2013 Regular Season?

I think this is unlikely, but if they use Tebow in the wildcat it isn’t completely out of the question that he throws the ball in a short yardage situation.  Belichick definitely likes to have a few tricks up his sleeves and he may bust out Tebow at some interesting moments.

Will Tebow Attempt a Pass in the 2013 Regular Season?

This kind of goes along with the TD pass prop bet, except the pass can be made from anywhere on the field.  If the Patriots ever use Tebow behind center you have to think he throws a pass at some point, even if it’s just to keep the defenders somewhat honest.

Will Tebow ever find the end zone?  I personally don’t think so because I don’t expect Brady to leave the field very often throughout the season, but again Belichick is the wild card here.

No matter how Tebow is used you can expect a media circus to commence every time he runs onto the field.  I hope Tebow does well as I feel he hasn’t been given a fair shot after getting wins in Denver, but NFL coaches just don’t seem to think he fits into their teams game plans.

To bet on these Tebow props head over to Bovada.lv, they are constantly offering new interesting props about what is of interest in the sporting world.