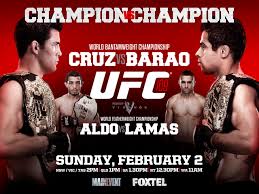 UFC 169 will crown two champions instead of the usual 1 that a PPV event generally offers.  The exception to this trend was of course very recently at UFC 168 when two of the hotter divisions had championship fights in what has gone down as the best card in UFC history.  UFC 169 does not risk going down as the biggest draw for a PPV event and the reason we are getting two title fights has more to do with the fact the card may be on the weaker side.  That said, nobody can complain with two belts being awarded at a UFC event and I for one am excited to see the action.

In the co-main event of evening Jose Aldo defends his title against Ricardo Lamas.  This division hasn’t received much love from UFC fans and this may be partially because of Jose Aldo’s dominance in this division.  Aldo has held the Featherweight Championship since it disolved the WEC and promoted him to UFC Champion for his UFC 129 fight on April 30th, 2011.  Before that he was the champion of the WEC since November 18th, 2009.  The problem seems to be the lack of talent below him in the featherweight division.  The one fight that everyone wanted to see was Aldo vs Edgar, who was dropping down from lightweight to take on the champion.  It was a battle, but Aldo pulled out the win by decision.  Now the oddsmakers have Aldo as a -600 (6/1) favourite to win this fight, which makes the fight have somewhat less draw than others.

My Pick: Jose Aldo should just be too fast for Ricardo Lamas.  Aldo has held the Featherweight Championship for 8 fights dating back to his WEC days and I do not expect Lamas to be the one to take the belt from him.

In the smallest division in the UFC, Renan Barao who is now the undisputed UFC Champion after Dominick Cruz was forced to vacate his title after another injury (he was supposed to fight Barao at this event), fights fan favourite Urijah Faber.  Barao had to change his fight plan to account for the change to Urijah Faber, but Faber took this fight on three weeks notice to keep the two championship fights on the card.  These two men fought at UFC 149 with Barao winning via unanimous decision.  Since that fight, Barao has finished two of the top fighters in the bantamweight division, while Faber has been very busy winning 4 fights (3 via submission) to make his way back to the top of the bantamweight division.

5Dimes.eu odds for the fight:

My Pick: Both of these men know how to finish fights.  A less prepared Urijah Faber may also get caught early in this fight, while trying to push the pace.  I like the under 4.5 rounds in this one for a decent return.