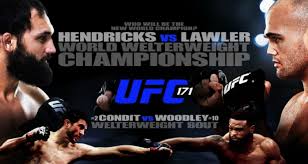 UFC 171 is set to take place tomorrow in Dallas.  It’s really a card built from the Welterweight division, with 6 of the top Welterweight fighters in the UFC making up the main card.  In fact 7 ranked Welterweight fighters are competing on this card out of the 15 ranked at UFC and Rick Story, who is ranked #14 is actually the underdog to Kelvin Gastelum on the main fight of the undercard.  The main attraction is the Welterweight title fight between Johny Hendricks and Robbie Lawler.  Georges St. Pierre, the long time title holder for this position recently vacated his title, so this fight will find out who the new UFC Welterweight Champion of the world is.

Online sportsbook 5Dimes.eu has odds available for all of the fights, as well as a wide variety of prop betting options, and it is where all of the odds listed in this article come from.

I like Hendricks to win this fight.  He’s become a very big favourite, but I feel that is rightfully deserved.  He beat up GSP at UFC 167, but lost via a controversial split decision.  He is a knockout king who I expect to be too much for Lawler.  Robbie is dangerous on his feet, so Hendricks might try to take him down, but whichever path to victory he chooses I expect a dominant win from Hendricks.  Lawler does have knockout power, which means he could win this fight, but I don’t see it happening.

I do like the Hendricks by KO/TKO prop bet that 5Dimes has available.  I see knockout being Hendricks road to victory, but I’m not against taking him at -420 either.

I’m surprised Condit is not a bigger favourite in this fight.  He did lose two fights in a row, but these were against GSP and Johny Hendricks and both were hard fought battles that weren’t one sided.  He then came out and knocked out Martin Kampmann who is a bit of a gatekeeper in the UFC now, which shows he is still very much on his game.  Woodley on the other hand lost two fights ago to Jake Shields.  His devastating knockout of Josh Koscheck may be getting a little bit too much recognition and swaying the odds here.  I really like Condit at -160.

Like I just said Shields beat Woodley less than a year ago.  It should be him fighting Condit in the title eliminator fight in my opinion.  That said he has big and dangerous Hector Lombard to deal with.  The way I see it is, sure Shields isn’t the most exciting fighter and doesn’t get his knockouts, but he is great on the ground and he is basically on a 4 fight winning streak including wins over Woodley and Maia recently, both big names in the division.  Lombard is basically a nobody to me.  He beat a washed up Marqardt who had his 3rd loss in a row in that fight.  He lost to Okami a year ago and he was released from the UFC.  He has no big wins on his resume so there is no knowing how he will react against a fighter of Shields quality.  I’m very surprised Shields is an underdog at all, let alone this big of an underdog.

Take Shields at +170 and make some cash!

Once again, head over to 5Dimes.eu to place your bets.  You will find the odds under ‘Fighting’ and ‘UFC’ and ‘Props’.  Good luck!