Bet On UFC 178 – Cerrone vs Alvarez, Poirier vs McGregor 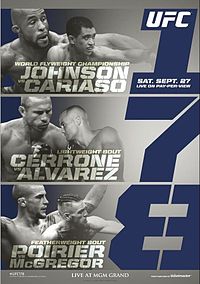 The UFC 178 card is stacked for this coming Saturday night in Las Vegas.  When you have Dominick Cruz’s return to the UFC after a 3 year absence as the final fight on the preliminary card you know that you main card is full of exciting, meaningful fights.  All of that said, just think how amazing this card would have been if Jon Jones didn’t injure his knee.  This could have been one of the best cards in UFC history, but now because it doesn’t really have the must see title fight we just have to be content that the depth of the card is on point.

The fights will take place at the MGM Grand in Las Vegas, which is a great venue for a big event such as this.  I should know, I was at UFC 168 when Silva broke his leg around Weidman’s knee.  For those of you going to this fight I suggest checking out some Las Vegas casino reviews to find out which sportsbooks offer the best options for betting on the fights and which offer the best casino action for the after party.

For those of you who aren’t lucky enough to be in Vegas this weekend then I suggest placing your bets through 5Dimes.eu.  They have the widest variety of UFC prop bets online and the lowest juice you will find closer to the fights.

This is the main event of the night because it’s the only title fight on the card.  That said, it’s not the fight I’m most looking forward to.  I’m expecting Johnson to dominate this fight from start to finish.

Cowboy is on a hot streak having won his last 4 fights all within the past year.  Cerrone just loves to fight and I wouldn’t be surprised if he fights a 5th time in 2014 if he can finish Alvarez.  If you look at Cerrone’s record in the WEC and UFC his losses only come against top guys except for 1 WEC loss.  He’s lost twice to Benson Henderson, once to Nate Diaz, once to Anthony Pettis and once to Rafael Dos Anjos.  In between those fights the guy has 15 wins in WEC or UFC.  Simply put Alvarez will have to be the real deal with a shot at the UFC title if he’s to beat Cerrone.  I’m just not willing to give him that much credit when he’s fought against weaker opponents in Bellator through the prime of his career.

This is a very strange fight for me to call.  Poirier started as a -180 favourite and now he’s a +225 underdog.  That change is massive and it shows how much hype there is behind Conor heading into this fight.  I think the smart money might be on Poirier, but I personally am on the McGregor hype train as well.  I think McGregor wins, but I’m not willing to take him as such a big favourite against a proven competitor like Dustin Poirier.  This is the fight I’m most looking forward to this Saturday and I don’t think I’m going to make a play on it.

Romero looks like he could be a beast in the middleweight division, but Tim Kennedy is so consistent and such a strong wrestler that it is hard to bet against him.  I’m on Kennedy as an underdog.