Bet On UFC 181 – Lawler vs Hendricks, Pettis vs Melendez – Odds and Picks

UFC 181 is a great card that UFC fans can get excited about.  These quality of cards have become somewhat few and far between in the UFC and seeing two title fights that all UFC fans will care about on the same card just makes me happy.  Both Pettis and Hendricks have had to nurse injuries after their last title fights, so these match-ups have been a long time in the making.  Other than the top two fights, the card isn’t super deep, but there is enough quality building up to the main two events that we can’t complain.

Hendricks won the title in his last fight with Lawler, which was back in March.  GSP left the UFC for a time, which allowed the two to fight for the Welterweight title.  After winning the first two rounds, Hendricks lost rounds 3 and 4, but dug deep to pull out the unanimous decision by taking it to Lawler in the 5th.  This winners mentality is what I believe will lead Hendricks to the belt once again.

Add in the fact that Hendricks hurt his right bicep in the first round of that fight, but powered on and you have to think he will be able to win the rematch.  Hendricks showed that he can stand with Lawler, who is one of the best on his feet in the UFC.  What Hendricks was unable to do was take Lawler to the mat, which he says was due to the injury.  If Hendricks can use his superior wrestling in this fight it might not be quite as close. 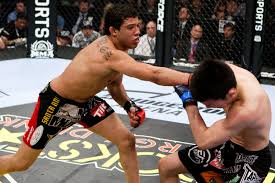 Pettis has some weapons that Melendez doesn’t have, but if he can weather the early storm from Pettis I think Melendez could pull out a decision win in this one.  Melendez is more used to the 5 round Championship Fights than Pettis having fought for a Championship in 10 of his last 11 fights because he was the Strikeforce Welterweight Champion for so long.

Melendez is as tough as they come and he has never been finished in his MMA career.  Pettis is arguably the best finisher in the UFC, but I could see Melendez taking this fight into the Championship rounds and then taking the fight to Pettis who has only been in one 5 round fight in his career.  At the odds being given, the smart money has to be on Melendez in this one.

Here are a few of my other picks for the card: