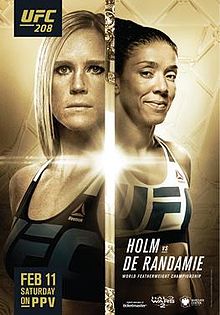 The UFC is headed back to New York with another PPV event this Saturday.  The first trip delivered in every sense of the word with UFC 205 going down as one of the best cards of all time.  The return trip for UFC 208 is not even trying to live up to the standard of UFC 205.  The UFC created a title out of thin air and booked Holly Holm, who is on a two fight losing streak, and Germaine de Ranadamie, who has yet to beat a top fighter in the UFC, as the main event of the card.

It’s arguably one of the worst PPV main events in recent history, but there are a few other solid fights on this card including Anderson Silva vs Derek Brunson and Dustin Poirier vs Jim Miller, so it’s a decent card on the whole.

In this article I will look at the odds for the big fights on the card and give a quick pick for each of these fights.  At the end of the article I’ll also provide a quick 3 step guide to getting your bets in on these fights for those of you interested in betting on this card.

I’m using the odds from BetOnline.ag for each of the fights.

This is a tough fight to call.  One on hand, Holm showed she’s really nothing special after being built up massively from her Ronda Rousey win.  She’s lost two straight and her last loss was the most telling because she lost to a fellow stand up fighter.  Even before Rousey, Holm was having trouble with some of the lower level fighters in the division squeaking out a split decision over Pennington and then winning an underwhelming fight over 39 year old Marion Reneau.

The problem with betting against Holm is that I have no clue what to make of de Randamie either.  She dominated her last couple fights with TKO wins over both Anna Elmose and Larissa Pacheco, but both of these girls don’t even have a win in the UFC.  Before these two fights she lost by TKO to Amanda Nunes which I can’t hold against her because we know how dangerous Nunes is now.  Before that though she squeaked out a win over Julie Kedzie, who is now on a 4 fight losing streak.

There’s no doubt that de Randamie is an explosive striker, but this is a step up in competition for her and I’m not sure how she will react.

As much as I don’t think Holm is as talented as they built her up to be we know she can go 5 rounds without difficulty and she’s good at keeping distance.  This will be a striking battle and Holm should be able to make adjustments from her loss to Shevchenko and apply them to de Randamie.

If Silva has anything left in the tank he should win this fight.  Silva is one of the best counter strikers in MMA history and Brunson is a fighter who comes forward looking for the knockout.  Brunson has been caught and finished by knockout three times in his career, each against elite fighters in Whittaker (his last fight), Romero and Souza.  The question is really whether or not Silva still has the speed and timing to catch Brunson on the way in.

Silva has definitely lost a step, but I still think he should be able to pull this fight off with a couple good counter strikes finding the chin.  If he loses this fight, which is perfect stylistically, then we can officially consider Silva a shot fighter.

Souza needed a fight and with all the other high ranked fighters booked or taking time off, Souza gets #13 ranked Tim Boetsch.  Jacare should easily be able to win this fight.  It’s not out of the question that Boetsch catches Souza with something, but Jacare is the better fighter in every aspect and he wins this 9 out of 10 times.

Poirier got caught by a perfect flurry by Michael Johnson in his last fight, but he doesn’t have to worry nearly as much about Jim Miller’s power.  Miller is on a nice 3 fight winning streak, but this is a big step up for Miller who is nearing the end of his career.

Poirier should have no trouble winning the stand up battle and his takedown defense is solid enough to prevent Miller from taking this to the mat.

Poirier should win here easily and bounce back up the rankings.

Now that you have my main card picks here’s a 3 step guide to get your bets in online.

First you need to open an online betting account.  I used the odds from BetOnline.ag above because they are our top rated sportsbook for UFC bets.  They accept players from around the world and are offering a 50% up to $2000 sign up bonus for new players.  Here’s our full review of BetOnline.

BetOnline accepts Visa, MasterCard, bitcoin, litecoin, Skrill, Neteller and more.  You should have no problem depositing on BetOnline and cashing out is just as easy.

Once on the BetOnline sportsbook site click on ‘Martial Arts’ from the left sidebar and then select ‘MMA’.  This will bring up all of the bets you can make on UFC 208.

Check out our UFC betting page to learn more about the various bets you can make on each fight.

I think that’s it.  Click here to visit BetOnline.ag