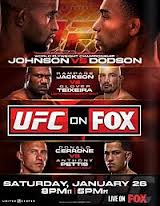 UFC is back for another week with UFC on Fox 6.  These Fox UFC cards have been good in the past and this one is no different with 3 very big fights on the card.

Here are the odds for each of the big 3 fights and my thoughts on each of them.  The odds are from 5Dimes.eu, which is the best sportsbook for betting on MMA online.

Anthony Pettis is a big, up and coming name in the Lightweight division, but he will have his hands full this Saturday with Donald Cerrone.  Pettis won his last two fights over Jeremy Stephens and Joe Lauzon and many people think he could get a shot at Benson Henderson, who he beat in WEC 53, for the title if he wins this fight.  Cerrone though will be no walkover.  He also defeated Jeremy Stephens recently and followed that up with a win against Melvin Guillard.  His only loss in the UFC came against Nate Diaz over a year ago.

Rampage is reaching the twilight of his career, but his brand is still strong, which is why he gets good fights like this.  This will likely be Jackson’s last fight in the UFC so we could see him try to go out with a bang.  Jackson had a title shot only two fights ago, losing to Jon Jones by submission.  He then lost a decision to Ryan Bader and will now fight Teixeira in his final fight.  Teixeira is at the top of his game and has won two fights by stoppage since coming to the UFC.  A win here over Rampage will do a lot to move him up the ladder and perhaps a top contender fight could be in line if he defeats Rampage.

Demetrious Johnson is battling Dodson for the UFC Flyweight title in the main event of the evening.  Johnson won the inaugural Flyweight Championship back in September, winning a split decision over Joseph Benavidez.  He is now up against Dodson, who was not included in the Flyweight tournament to find the inaugural champion.  Instead he won the Flyweight title eliminator bout in his second UFC fight via TKO.  Johnson isn’t a finisher, having never finished a fight in his UFC career, while Dodson finished 2 of his 3 fights.  It will be interesting to see if Dodson can catch Johnson in this one, or if it will go the full 5 rounds.

As mentioned before 5Dimes.eu is the best place to bet on UFC on Fox 6.  You will find the best odds there for this event, as you will for almost all UFC events in the future.