Bet On UFC on FX 6 – Sotiropoulos vs Pearson 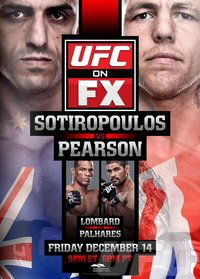 UFC on FX is back with the 6th card on the network and although it is considered one of the weakest cards on the UFC schedule this year, the card does feature the coaches match between George Sotiropoulos and Ross Pearson as a finale of sorts for The Ultimate Fighter: The Smashes.  In this The Ultimate Fighter season a team of Australian fighters lead by Sotiropoulos took on a team of UK fighters lead by Pearson.

The main card includes the coaches fight as well as the Welterweight Finals and Lightweight Finals from The Ultimate Fighter television series.  The only other fight on the main card is a Middleweight fight between Hector Lombard and Rousimar Palhares.

At this time 5Dimes.eu currently has odds available for the following two fights on the main card:

The odds for the shows final fights and the undercard may be available closer to Saturday.

Sotiropoulos is one of the most well known Aussie fighters in the world and he had a great start to his UFC career.  He lost in the semi-finals of the Hughes vs Serra season of The Ultimate Fighter, but then won his fight on the finale night and won his next 6 UFC fights.  Since then though he has lost his last two fights to Dennis Siver and Rafael dos Anjos.

It may be interesting to note that Pearson actually defeated Siver a couple years back, but Siver had improved before his fight with Sotiropoulos.  Pearson won his division in his The Ultimate Fighter season, but he has never really gotten in a roll in the UFC.  He has lost 3 of his last 5 fights after beating Siver.  For the odds though I say roll with Pearson.

The other fight on the card features Lombard vs Palhares.  Lombard is a Cuban fighter who was dominating Bellator and some other fighting promotions before recently coming over to the UFC and losing his first fight against Tim Boetsch.  He will look to get his first UFC win this weekend.  Palhares on the other hand has been in the UFC for quite some time and has won plenty of fights while only losing to some of the UFC’s elite heavyweights (Dan Henderson and Nate Marquardt).  His last fight was a loss though against a less proven opponent (Alan Belcher), but I see Belcher as a strong fighter and think Palhares may not be losing his touch quite as much as people think.  I like Palhares in this one as a fairly big dog.

Click here to visit 5Dimes.eu.  Then proceed to open a new account and make a deposit.  After you have funds online you are ready to bet.  You will find the odds for UFC on FX 6 by clicking on UFC under the Fighting header in the sportsbook.

For more information, and to see the entire card check out the wiki page.