This week, the NFL returns to Wembley Stadium in England when the Washington Redskins play the Cincinnati Bengals. The game is scheduled to begin at 9:30 AM. ET.

The Redskins won the NFC East last year and came into the season with high expectations, but with the emergence of the Dallas Cowboys and Philadelphia Eagles, they currently find themselves at 4-3, behind both teams in the NFC East standings.

Like the Redskins, the Bengals came into the season with high expectations after winning 12 games and the AFC North title last season. However, they are currently 3-4 and find themselves in danger of missing the playoffs. 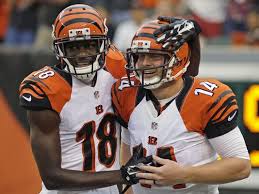 The Redskins will have a hard time slowing down AJ Green if Josh Norman is unable to go.

While most Bengals fans will point to their tough schedule as the reason for their poor start to the season, the team also didn’t look impressive against bad teams like the New York Jets, who they barely defeated in week 1.

Offensively, the Bengals have gotten a lot of production from Andy Dalton, A.J. Green, and running back Jeremy Hill, who are statistically close to the top of their respective positions. However, the team has been able to convert the production into points, and average 20 points per game, which is 23rd in the league.

Defensively, Cincinnati hasn’t fared much better, and is allowing opponents to score 23 points per game, which is 18th in the league.

The Redskins on the other hand have been playing much better after losing their first two games of the season. The team won four consecutive games before losing to the Detroit Lions last week.

Offensively, Washington is slightly better than Cincinnati when it comes to putting points on the board, averaging 22.7 points per game, which is tied for 15th in the league. Their defense on the other hand, has been just as bad as the Bengals, allowing opponents to score 23.1 points per game.

The Redskins will have to figure out a way to slow down A.J. Green, who is second to Julio Jones in receiving yards this season. After getting exploited by Antonio Brown in their season opener, the Redskins secondary has been attacked successfully by their opponents, and I expect the Bengals to do the same.

They will be hoping that Matt Jones continues his brilliant play, which will help them control the clock and keep the Bengals offense on the sideline longer. Their offense will also get some much needed help with the return of Jordan Reed, who missed the last two games because of a concussion.

If Josh Norman, whom the Redskins acquired in the offseason misses this game, Washington won’t have a defender to slow Green down, which could end up being the difference maker.

The Redskins have been playing better, but the Bengals are the better team, which is why I’m picking them to win and cover the spread.