The Buffalo Bills and Miami Dolphins renew their AFC East rivalry when they face each other on Sunday, at Sun Life Stadium in Miami. The game is scheduled to start at 4:25 PM. ET.

Since we are only two weeks into the season, it is difficult to tell just how good these teams will be this year. In week 1, the Bills pulled off an impressive win over the Indianapolis Colts and made life miserable for Andrew Luck.

The win prompted Bills coach Rex Ryan to throw a few jabs in the direction of the New England Patriots. The Patriots apparently weren’t pleased with Ryan’s comments and dropped 40 points on the Bills.  Despite the fact that they were down big in the game, the Bills showed a lot of heart and played their way back into the game.

In week 1, the Dolphins defeated the Washington Redskins in a close game, and they were expected to have an easier time against the Jacksonville Jaguars, who have been one of the worst teams in the NFL for years. 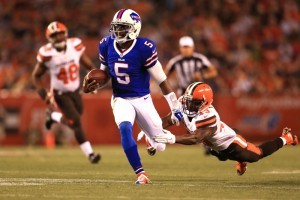 If Tyrod can play like he is capable, the Bills will have a great chance on the road this Sunday.

Things didn’t go as planned for the Dolphins, and they ended up losing to the Jaguars. A big reason the Dolphins lost that game was the ineffectiveness of their running game. Lamar Miller, their starting running back finished the game with 14 yards on 10 carries. As a team, Miami finished with 42 rushing yards for the game.

Miami’s inability to run the ball successfully was surprising because the Jaguars aren’t known for their defense. It also makes it easier for opponents to game plan against them because if they can’t run the ball, they will throw more than usual, making them a one-dimensional team, allowing the defenses they face to send pass rushers at the quarterback.

Defensively, Miami’s prized free agent signing Ndamukong Suh, finished the game with one tackle, and has three total tackles through two games. That is not the type of production the Dolphins were expecting, and Suh needs to step his game up to justify his big salary.

After a solid week 1, Bills quarterback Tyrod Taylor had trouble keeping the ball safe and threw three interceptions to go with his 3 touchdown passes. Bills fans are hoping that it was just a case of the jitters, since they were playing the defending champions, and he returns to his week 1 self this week.

The Bills have to be happy about what they saw from LeSean McCoy, who looked significantly better than he did the previous week. He is still not back to the form he showed as a member of the Philadelphia Eagles the past two seasons, but it looks like the hamstring injury he sustained in the preseason isn’t bothering him as much anymore.

BetOnline.ag has the Dolphins favored to win this one by 2.5 points. The over/under on the total points scored is 43.  Check out our full BetOnline review here.

This is going to be Miami’s home opener, which means they will be playing at a higher level than they have in the past two weeks. Unfortunately, they have trouble stopping the run, which means Buffalo is going to control the clock if they are successful on the ground. This is why I’m picking the Bills to cover the spread and win this game.