Week 2 of the 2015 NFL season has a lot of interesting matchups, one of which is the game between the New England Patriots and the Buffalo Bills. The game will take place at Ralph Wilson Stadium in Buffalo, at 1 PM. ET. On Sunday.

The Bills and Patriots are AFC East rivals, so there is no love lost between the two teams.  The Bills hiring Rex Ryan in the offseason adds some fuel to the fire because when Ryan was the coach of the New York Jets, his teams played well against the Patriots and knocked them out of the playoffs in 2011. Ryan also likes to talk a lot of smack about the Patriots, which is always entertaining.

Online sportsbook BetOnline.ag has the Bills vs Pats as a pick’em game this week.  The total for the game is set at 45.  Check out our full BetOnline review here.

Now let’s look at the game.  The Patriots looked very solid in their season opener against the Pittsburgh Steelers on Thursday, Rob Gronkowski and Tom Brady picked up where they left off last year, connecting for three touchdowns. 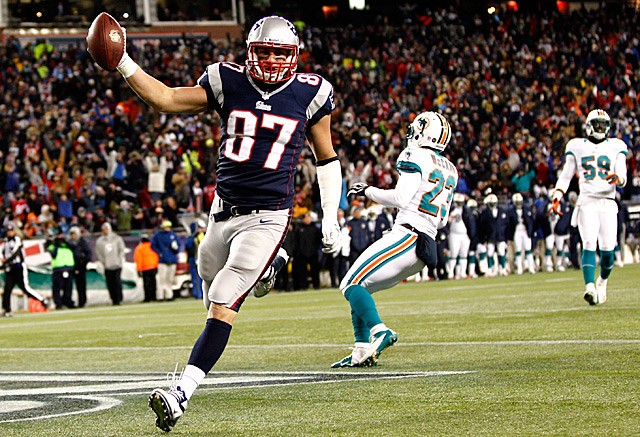 Will the Bills defense be able to shut down Gronk this week?

However, the Patriots running game was virtually non-existent, with the team finishing with 80 yards on 24 carries. This is something they will need to improve on this week at Buffalo because the Bills have one of the best pass defenses in the league. If the Patriots can’t run the ball better than they did against the Steelers, the Bills defense will make Tom Brady wish his four-game suspension was upheld.

Last week, the Bills pulled off a big win against the Indianapolis Colts, a team many experts predicted was a Super Bowl contender. Their defense did very well against the Colts offense, by shutting down the running game and going after Andrew Luck.

Despite their performance against the Colts, the Bills had a few issues of their own. Newly acquired running back LeSean McCoy wasn’t very impressive in his debut with the Bills, he finished the game with 41 yards on 17 carries, which was good for a 2.4 yard per carry average. He added 46 receiving yards in the game, but he needs to give a better performance as a runner for Buffalo to win.

One of the bright spots for Buffalo last week was quarterback Tyrod Taylor. He was given the starting job by Rex Ryan prior to the start of the season and rewarded his coach’s faith with an impressive first start.  Taylor finished the game 14-19, for 195 yards and 1 touchdown. He also added 41 yards on the ground. The Bills will be hoping he can give them a similar performance this week.

The Patriots will have LeGarrette Blount back from suspension this week, which should help their struggling running game and give them a balanced attack. Their defense, on the other hand, will need to play better than it did last week when they gave up 331 passing yards to Ben Roethlisberger and 127 yards to DeAngelo Williams.

A lot of people are going to put a lot of money on the Patriots in this game because they have dominated their AFC East opponents since Bill Belichick became the head coach. From what I saw last week, the Bills are a very good team. They should be able to stop the New England rushing attack, and send blitzes at Tom Brady all day. The Patriots defense was also very poor last week, so I don’t have a lot of confidence in them. The smart play here is to pick the Bills to win or go over on the final score.