The Los Angeles Clippers are 3.5 games behind the Oklahoma City Thunder in the Western Conference standings and will try to reduce the Thunder’s lead with a win over the Utah Jazz on Friday night. The game will take place at the Vivint Smart Home Arena in Salt Lake City and it will begin at 9 PM. ET.

Visit BetOnline.ag to bet on this game. 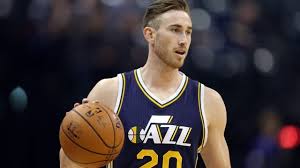 The Jazz need to get a W, and I’m expecting a big game from Hayward.

This year, the Clippers are hoping things will be different, but they need to move up the standings to avoid a second round meeting with the Golden State Warriors. The Clippers played most of the season without the services of Blake Griffin, who has been sidelined with injuries since December. Griffin returned to the lineup on Sunday, and gives the Clippers some much needed offensive fire power.

With Griffin having to sit out most of the season while recovering from his injuries, he will have fresh legs going into the playoffs, which could make a difference against players that had to play all 82 regular season games.

The Utah Jazz still being in contention for a playoff spot this late in the season is a surprise to a lot of people. Utah currently sits in 8th place in the West with a one game lead over the Houston Rockets. After their game with the Clippers, the Jazz only have one more opponent with a winning record, giving them a good chance to make the playoffs.

The Jazz have been playing very well lately, and have won six of their last 10 games. Offensively, Utah is one of the worst teams in the NBA. The Jazz average 97.7 points per game, which is 28th in the league.

Defensively, opponents score an average of 95.8 points against the Jazz, which is second best in the NBA behind the San Antonio Spurs.

The Jazz will have to rely on their defense to help them win against the Clippers. The Jazz lost a two point game to the San Antonio Spurs in their last game, so that should give them some confidence that they can win this game.

BetOnline.ag has the Jazz as 12 point favourites over the Clippers in this game.  The over/under is set at 184.  Here’s a full BetOnline review.

The Jazz have been very solid at home, and have big wins against teams like the Cleveland Cavaliers on their home court. With the chance to play in the playoffs on the line, I expect them to be ready for whatever the Clippers throw their way so I’m picking them to cover the spread.