UFC 196 is still a few weeks away, but I’m getting excited for the latest fight in the Conor McGregor saga.  I was actually on Jose Aldo in Conor’s title fight with the long-time featherweight champ, but after that early knockout I don’t see how I can bet against Conor again.  That said, this fight with Rafael Dos Anjos will no doubt be McGregor’s toughest fight yet and it will be interesting to see how he transitions from featherweight to lightweight.

Here are the current odds for the McGregor vs Dos Anjos fight from BetOnline.ag:

I’m surprised that Conor is such a big favourite heading into this fight.  But like I said in the intro, after that fight with Aldo it’s very hard to bet against the man.

These odds will change a lot in the next few weeks and I expect the odds to be closer to a pick’em fight once UFC 196 comes around.

To learn more about betting on MMA click here. 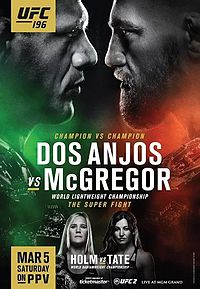 This will be a very difficult stylistic match-up for Conor, but I still feel the need to back him.  He looks to be on his own level at this point in his career and he’s had the answer to everything the UFC has thrown at him so far.

Dos Anjos is no joke though and he was able to destroy two of the best strikers in the Lightweight Division in title fights already with Anthony Pettis and Donald Cerrone both getting dominated by the Brazilian.  Dos Anjos was able to put the pressure on both men and although the fight against Cerrone was a faster finish, the complete dominance in his fight over Anthony Pettis was more impressive to me over the course of 5 rounds.

All of that said, I think McGregor has much better defensive footwork than either Pettis or Cerrone and he has much more ability to turn Dos Anjos’ aggression against him with some great movement and counters, similar to how he finished Aldo so early.

I don’t think Dos Anjos gets finished in the first minute like Aldo because I don’t see him rushing in early by letting his emotions get the best of him.  That said, with McGregor’s power it only takes one shot and over the course of a five round fight I expect McGregor to land one of his finishing shots.

I am actually expecting we see the best version of McGregor in this fight and that is a scary proposition for Dos Anjos.

I’m taking McGregor to hold the belt simultaneously at two weight classes and continue to make history in the UFC.

I will probably wait until closer to the fight to place my wager because I do expect the odds on McGregor to come down to closer to -120 by fight night.