The Men’s 5000 metres is the first speed skating competition of the 2014 Winter Olympics in Sochi.  The event generally takes a little over 6 minutes per athlete and Sven Kramer is a massive favourite.  Here are the odds from Bet365.

These are the 6 favourites to win the first speed skating event of the Olympics.  Everyone else in the competition has 50/1 odds or greater. 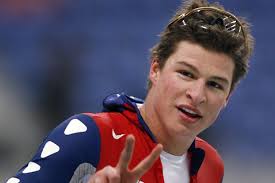 The oddsmakers see Sven Kramer winning this event 6 out of 7 times!  The Dutchman won the gold medal at the World Championships in Sochi in 2013, as well as the gold in Vancouver four years ago.  Looking at his Wikipedia page you see a ton of gold medal wins.  In 2010 Kramer finished the race in 6:14.60 claiming the Olympic record by 0.06 seconds.  He will look to build on this record in Sochi.  Kramer would have also won the 10,000 metres in Vancouver, but he was disqualified after he failed to change lanes at one point in the race.  Kramer should win the 5000 m unless he makes a similar mistake to that one in this event in Sochi.

Jorrit Bergsmas, who is also from the Netherlands is Kramer’s biggest threat on the ice.  He beat Kramer at the 2012 Dutch Champoinships and just recently finished in second to Kramer at the World Championships in Sochi.  He will have to an incredible race to defeat Kramer, but it is possible.

Ivan Skobrev is a Russian speed skater who is the best shot at keeping a Dutchman off the gold medal podium in Sochi.  His personal best time though is 7 seconds longer than Kramers and 4 seconds longer than Bergsma.  That said, if he can somehow channel strength from the home town crowd he may have a shot.  That said I’d stay away from Skobrev, as the World Championships were held in Sochi last year and he did not medal.

For any American bettors I suggest placing your wagers at Bovada.lv.  Otherwise Bet365.com is the best spot for betting on the Winter Olympics, including the 5000 metre speed skating.