Atlantic Cup rivals DC United will now travel to New York, where they will be hosted by the Red Bulls on Sunday afternoon, in a huge Eastern Conference battle as both teams are involved in play-off scenarios. The New York Red Bulls are at the 3rd spot trying to climb at the top of the Eastern Conference, while DC United have been inconsistent all season, and as a result they have dropped to the 8th spot of the Conference. 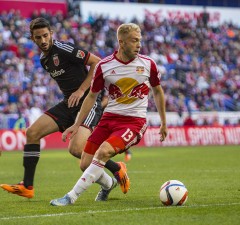 The New York Red Bulls (12-9-7) are sitting at the 3 spot of the Eastern Conference with 43 points after 28 matches. They are just a point behind NYCFC in the race for the Eastern title and 3 behind Conference leaders Toronto. Their 12 match undefeated streak that they are on is the best in franchise history. New York have lost at home just twice this season (10-2-1), with their last defeat dating back in April 10th. In their last match they defeated the Whitecaps with 1-0 at Vancouver, in a match where the Red Bulls had total control of the match. New York Red Bulls will be missing a few injured players, as Connor Lade and Gideon Baah remain sidelined through injury. On top of that, Mike Grella and Alex Muyl are both suspended and will miss out.

On the other hand, DC United (7-9-11) have been inconsistent all season, and it is only natural that they dropped from the play-off spots. They have dropped to the 8th spot of the Eastern Conference with 32 points, 2 points behind the 6th places Orlando City. Their six-game unbeaten run came to an end at New York against NYCFC in their last match, when they lost with 2-3 after Lampard’s winning goal at the 93rd minute. DC United will be missing Luciano Acosta, who is suspended, and that will be a real blow to their chances. On top of that, Chris Korb, Collin Martin, Chris Rolfe, Alhaji Kamara and Charlie Horton are all out, with Jared Jeffrey, Taylor Kemp and Kofi Opare all doubts, so DC are really stretched here.

The Red Bulls have been dominant in their home games against DC United recently, as they have won all 6 previous meetings, with 5 clean sheets. They should keep their strong run going with another win here. DC have not won away in seven and are facing the worst possible opponent, a team that hasn’t been defeated in 12 matches. This does not look good for DC.