The New England Patriots and Indianapolis Colts will face off this week in a rematch of last season’s AFC Championship Game. The game will take place on Sunday night at Lucas Oil Stadium, and is scheduled to begin at 8:30 PM. ET.

Last season, the Patriots dominated the Colts in AFC Championship Game, which was also the game that started the NFL’s investigation of the Patriots for using deflated game balls. The Deflategate scandal followed the team during the offseason and the team ended up paying a fine and losing future draft picks. 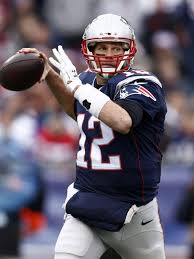 Brady may be playing with a chip on his shoulder in this AFC Championship game rematch.

With the scandal behind them, the Patriots have silenced their critics with their play this season, and would love nothing more than to embarrass the Colts for their part in the scandal.

Right now, the Patriots are one of the five undefeated teams left in the NFL, and have dominated all four opponents they have faced this year. Tom Brady is one of the front runners for the MVP award, and their offense is averaging 32.1 points per game, which is the second best in the league this season.

The Colts came into the season with championship aspirations because they improved their team in the offseason with the addition of veterans like Andre Johnson and Frank Gore. Unfortunately, the new additions haven’t had the impact the team was expecting, which is one of the reasons they haven’t looked like a contender so far this year.

Andrew Luck also hasn’t played like his usual self, and has been turnover prone so far. After a 1-2 start, the team revealed Luck has been dealing with an injury in his throwing arm, and benched him in the last two games to give him a chance to heal.

Matt Hasselbeck filled in well for Luck in the last two games, and led the team to two wins in Luck’s absence. Fortunately, the Colts are still in good shape to make the playoffs because they play in the AFC South.

The Colts will be hoping to have Luck back in the lineup this week because they will need to find a way to keep up with the high scoring Patriots offense and Luck gives them the best chance to do so.

Since the Colts drafted Andrew Luck, the Patriots have dominated the series. New England has won four consecutive games against Indianapolis, and will be trying to make it five straight.

The key to win this game for the Colts will be to establish their running game early. Frank Gore has been playing better in recent weeks, but they will need him at his best in this game because an effective running game will help them control the clock. Controlling the clock will keep the Patriots offense on the sidelines, giving the Colts a better chance to win the game.

BetOnline.ag has the Patriots favored to win the game by 9 points. The over/under on total points scored is 55 points.  Check out our full BetOnline review to learn more about our recommended bookie.

The Patriots have been playing with a chip on their shoulder all season they are going against the team responsible for the Deflategate scandal, so I expect them to make a statement by winning big. Take the spread in this game.