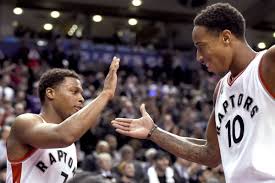 Lowry and De Rozan need to play better for the Raps to win games in round 2.

The Miami Heat and Toronto Raptors will kick-off the first game of their Eastern Conference semifinal series on Thursday at the Air Canada Centre in Toronto. The game is scheduled to start at 8 PM. ET.

Both teams played the full seven games in their respective first round matchups, so fatigue will be a factor for both sides.

The Raptors won their first playoff series since 2001 by defeating the Indiana Pacers, who showed a lot of heart against the team with the second best record in the Eastern Conference. In that series, Toronto’s All-Star backcourt of DeMar DeRozan and Kyle Lowry shot below 32 percent, but the team was able to pull off the victory thanks to timely contributions from their teammates.

The Raptors will be hoping that DeRozan and Lowry were suffering from playoff jitters and will find their shooting touch against the Heat, who put up a lot of points in the first round.

The Heat got off to a fast start against the Charlotte Hornets in their first round series, setting a record for most points scored in the first two games while taking a 2-0 lead. The Hornets stormed back and took the next three games, leaving the Heat with their backs against the wall.

Miami Responded by winning the next game and forced a seventh game, in which they blew out the Hornets. The series victory against the Hornets was Miami’s first playoff series win since LeBron James left for Cleveland, and the fact that they did it without the services of Chris Bosh who missed the second half of the season, made it more impressive.

The Raptors won the regular season series between the two teams 3-1, so they will be going into this series with some confidence. However, if DeRozan and Lowry can’t get their shots to fall, the Raptors will have trouble getting out of the second round.

Dwyane Wade led the Heat in scoring in the first round, averaging 19 points per game. Goran Dragic also made an impact in the last round with 25 points in game 7.

Despite his poor shooting in the first round, DeMar DeRozan still led the Raptors in scoring, averaging 23.5 points per game, and he will be counted on to continue doing so against the Heat.

Unlike their respective first round series, this series will be a defensive battle because the Heat and Raptors were two of the best defensive teams in the NBA this season. Hassan Whiteside is one of the reasons the Heat are so good defensively, averaging 11.4 rebounds and 3.4 blocks in the first round.

With Whiteside manning the middle, the Raptors will be forced to take more jumpers than they would like.

Bovada.lv has the Raptors opening as 4 point favorites in this game.  The over/under is set at 191.  Here’s a full Bovada review if you’d like to check out the sportsbook.  They can also now be classified as a bitoin casino because they just began accepting bitcoin as a payment method in the last few weeks.

The Heat play very well at home but they have been underwhelming on the road so far, so I’m picking the Raptors to win this game.