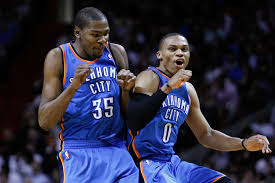 The OKC stars know that tonight at home is their best chance to pull off this upset of the Spurs.

The Oklahoma City Thunder will be trying to end their Western Conference semifinals series against the San Antonio Spurs when they meet at the Chesapeake Energy Arena on Friday night. The game will be televised on ESPN and is scheduled to begin at 8:30 PM. ET.

The San Antonio Spurs, who came into the series as the favorites, made a statement in the first game of the series by defeating the Thunder 124-92. Free agent pickup LaMarcus Aldridge was the difference maker in the game, scoring 38 points and grabbing 6 rebounds.

After the game, most fans and experts thought the Thunder had no chance of winning the series, but they responded with a spirited effort in game 2 and won the game 98-97. In that game, Aldridge was even better, scoring 41 points and grabbing 8 rebounds. Unfortunately for the Spurs, only two other players scored in double figures.

The teams split the next two games in Oklahoma City tying up the series as they headed into game 5. The Thunder pulled off a big win in game 5 and have a great opportunity to close out the series at home.

Kevin Durant and Russell Westbrook have been big for the Thunder in the series, reminding the rest of the NBA that there are more than two good teams in the Western Conference. The Thunder have also been getting quality minutes from their supporting cast, with players like Steven Adams, who had 17 rebounds in game 2, to go with his 12 points.

With their backs against the wall, the Spurs know that they can’t afford to lose Thursday’s game, but they have to play better than they have the last two games. LaMarcus Aldridge has done his part for most of the series, but he hasn’t received enough help from the rest of his teammates.

Manu Ginobli and Tony Parker, two of the biggest reasons the Spurs have been successful in the past have been very inconsistent in this series. Defensively, neither player has been able to keep Russell Westbrook in check, which has haunted San Antonio all series long.

Kahwi Leonard won the NBA’s Defensive Player of the Year award for the second consecutive season, but he has had his hands full with Kevin Durant so far. Durant has been able to get the shots he likes for the most part, which is something the Spurs can’t afford to have a shooter of his calibre do.

Offensively, Leonard isn’t expected to save the day, but he has to figure out a way to get going as well if the Spurs want to win this series.

BetOnline.ag has the Spurs favored to win this game by 1.5 points. The over/under on total points scored is 195.  Here’s a full review of BetOnline if you want more info on the sportsbook.

The Thunder have all the momentum going into this game, but it is impossible to count out a team coached by Greg Popovich. The truth of the matter is the Spurs will come out very strong, but the Thunder also don’t want the series to return to San Antonio, and will play better. The smart money is on the Thunder to cover and win.