The NFL playoffs are set to begin this weekend, and fans can expect to see the best teams in the league compete for a chance to play in the Super Bowl.

One of the best games this weekend is between the Pittsburgh Steelers and Cincinnati Bengals. The game will be played at Paul Brown Stadium, and is scheduled to begin at 8:15 PM. ET. On Saturday.

The Cincinnati Bengals had one of the best regular seasons in franchise history, finishing with a 12-4 record and winning the AFC North for the second time in three years. Despite their recent successes, the Bengals are still looking for their first playoff win since 1990, when they defeated the Houston Oilers in the Wild Card round. 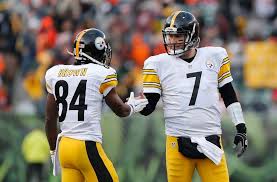 The Big Ben to Brown connection should be in full force Saturday night.

The Pittsburgh Steelers are also hoping to have more success in the playoffs this year than they did last year when they were eliminated by their AFC North rivals the Baltimore Ravens in the Wild Card round.

The Bengals were the second best defensive team in the NFL this season, and were also very good on the offensive side of the ball, averaging 26.2 points per game, which was the 7th best average.

Unfortunately, the team will be without quarterback Andy Dalton, who was having his best season as a pro before suffering an injury late in the season.

A.J. McCarron, who will be the starting quarterback for the Bengals on Saturday, has done a decent job filling in for Dalton, but he will need to be at his best to give the Bengals a chance to win the game.

Pittsburgh has also dealt with a lot of injuries this season and will be without their top two running backs when they play Cincinnati this weekend. Quarterback Ben Roethlisberger also sat out a few games during the season due to injuries, but is back to his old form, which is good news for the Steelers.

With the lack of depth at the running back position, the Steelers will be forced to throw the ball a lot in this game. Since they have Antonio Brown, who finished with 1,834 receiving yards this season, and Martavis Bryant, who finished with 765 yards, they should be able to create problems for the Cincinnati secondary.

On the defensive end, Pittsburgh was much improved this season than they were last year, but they still gave up some big plays during the season, which is something they have to work on in this game because the Bengals have A.J. Green, who is known for making big plays.

BetOnline.ag has the Steelers favored to win the game by 3 points. The over/under on total points scored is 45.5.  Check out our full BetOnline.ag review to learn more about our top rated sportsbook.

Bengals coach Marvin Lewis is going to try to end his winless postseason drought so the Bengals are coming into the game with some extra motivation. Unfortunately, they won’t have their star quarterback on the field on Saturday, which is why I’m picking the Steelers to win.