The AFC South crown will be up for grabs this week when the Indianapolis Colts take on the Houston Texans at Lucas Oil Stadium on Sunday afternoon. The game is scheduled to begin at 1 PM. ET. 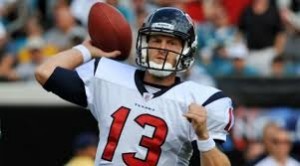 With Hoyer ruled out, TJ Yates will start at QB for the Texans.

The AFC South and NFC East have been competing for the worst division in the NFL this season because a lot of the teams that were expected to be contenders this season have been disappointing.

The Colts, who made it to the AFC Championship Game last season are currently 6-7, and are in danger of missing the playoffs with a loss to the Texans on Sunday. To make matters worse, the Colts might have to turn to their 3rd string quarterback because Andrew Luck is still injured and Matt Hasselbeck suffered an injury last week against the Jaguars which could prevent him from playing in this game.

The Texans didn’t have the kind of expectations that the Colts came into the season with because their quarterback situation was unresolved going into the season. After a slow start to the year, they were able to turn things around and won four straight games before dropping their last two.

In the first meeting between these teams, Andre Johnson had his best game of the season against his former team, helping the Colts win the game despite Andre Luck not playing in the game. The Colts will likely try to get him the ball a lot in this game with hopes of a repeat performance from the aging wide receiver.

Last week, the Colts were embarrassed by the Jacksonville Jaguars, who also have a chance to win the division, giving them their first division loss since they drafted Andrew Luck. They will try to bounce back from the 35 point loss and improve their chances of winning the division by beating the Texans.

Last week, Houston lost at home to the New England Patriots, they also suffered a big loss when starting quarterback Brian Hoyer left the game with a concussion. Hoyer’s injury will force him to miss this game, which means the Texans will be relying on T.J Yates to lead them to victory.

The Texans defense has been getting a lot of pressure on opposing quarterbacks in recent weeks, but it hasn’t been enough to help them win their last two games because they allowed their opponents to score 28.5 points in those two games.

With J.J. Watt still dealing with a broken hand, the defense won’t be able to get as much pressure as they would like against the Colts.

With an injured Watt and Yates at quarterback, expect the Texans to try running the ball as much as possible, especially since they are playing one of the worst run defenses in the NFL.

Indianapolis should also have some success on the ground against the Texans average run defense.

BetOnline.ag has the betting line for this game currently set at even, which means you have to pick the winner. The over/under on total points scored is not yet available.

With all the injuries both team have, this game is basically a toss-up. In this situation, I usually pick the home team to win so I’m going with the Colts to continue their dominance of the Texans.