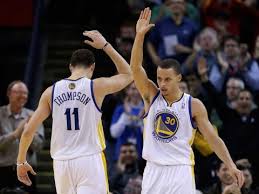 Curry and Klay are the game breakers that can go off at any point in the game. If either of them have a big game the Warriors should be fine.

The Golden State Warriors and Oklahoma City Thunder will continue their Western Conference Finals series at the Chesapeake Energy Arena in Oklahoma City on Sunday night. The game is scheduled to begin at 8 PM. ET.

Prior to the start of this series, basketball fans expected an exciting series. With the series currently tied at 1-1, it’s fair to say their expectations have been met.

The Oklahoma City Thunder surprised a lot of basketball fans and experts when they defeated the San Antonio Spurs in the second round of the playoffs. The Spurs, who won a franchise best 67 games, could not figure out how to slow down Russell Westbrook and Kevin Durant, costing them a chance to play in the Western Conference Finals.

In the first game, the Thunder had great ball movement and five players finished with double digit scores.

In the second game, the Warriors bounced back with a blowout of the Thunder winning the game 118-91. The Thunder kept the game close for most of the first half, but the Warriors blew it wide open in the second half. Stephen Curry led the way with 28 points on 9 of 15 shooting, and the Warriors finished with seven players in double figures.

However, defeating the Warriors twice in a row is easier said than done because they haven’t lost consecutive games all season long.

The Warriors also have a tough task ahead of them as they will be trying to defeat a team that is playing its best basketball of the year at home to take back the home court advantage.

Golden State will rely on MVP Stephen Curry to lead the way as he has all season long, but they will need consistent production from players like Draymond Green, Andrew Bogut, and Shaun Livingston, who has struggled so far in this series.

BetOnline.ag has the Golden State Warriors favored to win the game by 2.5 points. The over/under on total points scored is 220.  Here’s a full BetOnline review.

Game 3 is probably going to be the most exciting game of the series because it is a very big game for both sides. The Thunder will bring their A game, but I don’t think it will be enough. Golden State will find a way to win a very close game, and I’m picking them to cover the spread.