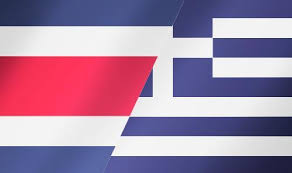 In probably one of the most unexpected round of 16 matchups in World Cup history, Costa Rica will battle Greece this coming Sunday.  Costa Rica was written off before the tournament even began with online sportsbook Bet365 giving them a 2500/1 chance of winning the World Cup (the worst odds in the tournament) and Sports Interaction gave them a 67/1 chance to win their group.  The proved everyone wrong, winning their group in impressive fashion with wins over powerhouses Uruguay and Italy followed up by a draw in a meaningless game against England.

Greece didn’t advance from their group with quite as much ease.  After a loss to Colombia in their first game and losing a man early in their second game against Japan their chances for advancement looked slim.  But Greece pulled out a draw with 10 men against Japan and then pulled off a stunning last minute victory over Ivory Coast to book their place in this game.

Here are the odds both for regulation time and to advance:

I like Costa Rica to win this game in regulation.  Costa Rica has been a surprise, but the way they have been winning their games has been very impressive.  Not only have they finished with more goals than both Uruguay and Italy, but they also were right with each of these power houses in terms of possession numbers, attacks and shots on goal.  The same can be said in the English game, but that match was much less exciting.

Costa Rica has proven to be very organized at the back end as well.  They only allowed one goal in their 3 matches and it was an early penalty kick goal conceded to Uruguay.  Since then they’ve kept a clean sheet against both Italy and England.  It is hard for me to believe that Greece, who has been held scoreless in 5 of their last 7 games will be able to get many quality chances against this Costa Rican team.

The Greeks were fortunate to come this far and I expect it to be their last game.   The Cinderella story of the Costa Ricans will continue into the quarterfinals!