The New York Giants will be trying to improve their playoff seeding when they host the Detroit Lions at MetLife Stadium on Sunday afternoon. The game is scheduled to begin at 1 PM. ET.

The Lions are coming into the game with a five game winning streak that has helped them climb to the top of the NFC North standings. The team, which wasn’t expected to be very good this year, is also currently the second seed in the NFC, and if the season ended today, they would have home field advantage for most of the playoffs. 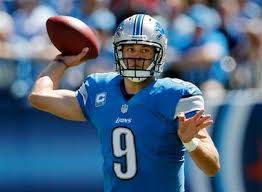 Stafford’s finger injury on his throwing hand is a concern for the Lions moving forward.

Like the Lions, the Giants weren’t expected to do much this year, but they have surprised the league by being one of the best teams in the NFC. Despite New York’s success, the team is currently playing for a Wildcard spot because the Dallas Cowboys are sitting on top of the NFC East with an 11-2 record, which is the best in the NFL.

The key to Detroit’s success this year has been the stellar play of Matthew Stafford, who is one of the front runners for the MVP award. Like they have done all season, the Lions will be relying on Stafford to lead them to a victory over the Giants. However, a finger injury he suffered against the Minnesota Vikings last week might impact how well Stafford plays on Sunday.

Since Detroit is one of the worst rushing teams in the league, the team has to find a way to protect Stafford better because they will need him healthy if they want to make a deep postseason run this year.

The Giants bounced back from their loss to the Pittsburgh Steelers two weeks ago to hand the Cowboys their second loss of the season last week. The victory over the Cowboys gave the Giants the distinction of being the only team to defeat Dallas this season.

In that game, Eli Manning and Odell Beckham Jr. led the way offensively, but their revamped defense gets the credit for shutting down Ezekiel Elliot and Dak Prescott, who are both leading MVP candidates.

The Giants will be trying to build on the momentum of defeating the best team in the NFL and will be going for their 8th win in nine games.

Due to the success of the Cowboys, the Giants have been flying under the radar for most of the season, but they will be a difficult team to defeat when the playoffs begin, which is why the Lions need to get home field advantage over them, which starts by winning this game.

The Lions are a gritty team that finds ways to win games they aren’t expected to win. However, the injury to Stafford’s finger is a cause for concern so I’m picking the Giants to win and cover the spread.