The Titans vs Lions is a game that I’m keying on this weekend.  I think the game is somewhat flying under the radar because the Titans don’t generally bring a ton of fanfare, but I see this game as a potential shootout between a pass heavy Lions team and a Titans defense that does not allow you to establish the run.

Let’s get into the odds for this game and then I’ll give my takes.

***Bovada.lv is offering a 100% up to $250 sign up bonus for the first few weeks of the season.  Bovada is hands down the best sportsbook for Americans looking to bet on the NFL.  Check out our full review here to learn more.

Here are the betting lines from Bovada.lv. 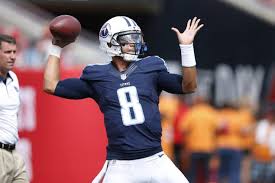 Let’s kick this off with my favourite pick for this game.  The over/under is higher than you may expect from a Titans game, but I think there are good reasons for that total and I actually love the over in this game.

The Titans played a very strong Vikings defense last week, and although they weren’t able to put up big numbers on offense, they did show glimpses of brilliance and another week with Tajae Sharpe and DeMarco Murray against a Lions defense that couldn’t do a thing against Luck and the Colts in the second half of their game will allow the Titans to move the ball much more easily this week.  The Lions also gave up 3 TD’s to Colts tight ends last week, so I think Delanie Walker is going to be a target monster and a huge weapon for Marcus Mariota this Sunday.

So, I think the Titans offense will be able to move the ball against the Lions.

Add in the fact that the Lions showed they can move the ball in the air against the Colts.  Yes, the Colts could be considered the worst defense in the league, but I still like the Lions pass attack with Riddick in the backfield and Tate, Jones Jr. and Ebron all legitimate targets.  The Titans defense looked good last week, but they were playing a one dimensional offense in Minnesota, who had Shaun Hill at QB.  The Lions offense is far superior to the Vikings and I think the Titans defense will be exposed.

Also, the fact that the Titans are so good against the run, should force the Lions to throw the ball a ton in this game, which will slow down the clock and allow the points to roll in.

This game has the makings of a shootout.

I really think this game could go either way, so I’ll happily take the Titans +6.