The Kansas City Chiefs will be trying to keep their chances of winning AFC West alive when they travel to Georgia to take on the Atlanta Falcons. The game is scheduled to begin at 1 PM. ET.

The Chiefs have been flying under the radar for most of the season thanks to a 2-2 start to their season and the emergence of the Oakland Raiders in the AFC West. Despite not getting the amount of attention their division rivals have been receiving, the Chiefs have won seven of their last eight games, which includes road victories over the Raiders and the Denver Broncos.

After being in a tie with the Broncos for second place in the division, the Chiefs took sole possession with a win over Denver last week, putting them a game behind the Raiders. 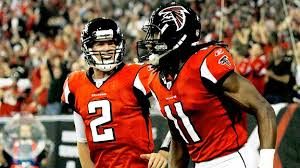 This could be a monster spot for Julio.

Since they have road victories against the Raiders and Broncos, the Chiefs are in control of their destiny, and will win the division if they win their remaining five games.

The Atlanta Falcons are in control of the NFC South, but still feel they have a lot to prove because they aren‘t getting a lot of love despite having the third best record in the NFC. The Falcons also have big wins over the Raiders, Broncos, Packers, Panthers, and Cardinals, proving they are a very dangerous team that will be tough to deal with in the playoffs.

Like the Raiders, the Falcons have the Buccaneers sitting one game behind them in the standings, which makes this a game neither team can afford to lose.

The Chiefs will need to devise a game plan on stopping Julio Jones, who is having the best statistical season of his career. Their defense had been playing well for most of the season, and are allowing opponents to score 19.5 points per game, which is eighth in the league.

During their last eight games, the Chiefs defense held opponents under 17 points five times. In their loss to the Tampa Bay Buccaneers, they gave up 19 points, but couldn’t keep it going in their game against Denver, allowing 27 points in the game.

Head coach Andy Reid will try to get his defense back on track before the game to avoid being embarrassed by Matt Ryan and his receivers. The Falcons offense has been the key to the team’s success because it has kept them in games when their defense is struggling. The Falcons are currently the top scoring team in the NFL, scoring 32.5 points per game. The team is averaging 303.1 passing yards per game and 108.4 rushing yards per game, making it difficult for opponents to shut their offense down.

The Falcons have the advantage offensively, but their defense is not very reliable. However, the Chiefs are offensively challenged, and might be without receiver Jeremy Maclin, who was held out of practice during the week, so I’m picking the Falcons to win and cover the spread. Taking the over on points scored is also a good idea.