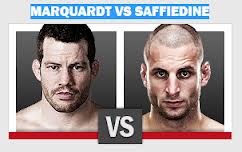 The Strikeforce era of MMA is coming to an end this Saturday in Oklahoma City.  The Strikeforce fighters will move to the UFC and battle it out with the best in the world.  This last event does have a couple of big names fighting.  The first being Nate Marquardt who will take on Tarec Saffiedine in five round welterweight tilt.  And the second being Daniel Cormier who is a Strikeforce staple in the heavyweight division.

5Dimes.eu is our top rated bookie for MMA betting and like usual they have the best lines for this fight:

Marquardt was a pretty big name in the UFC a few years back and actually fought Anderson Silva for the title in the middleweight division back in 2007 at UFC 73.  Marquardt lost by TKO in the first round, but that shows how big of a name he was just 5 years ago.  In the past 5 years he also fought the who’s who of the middleweight division at the UFC defeating fighters such as Martin Kampmann, Demian Maia and Rousimar Palhares, while losing to big names like Chael Sonnen and Yushin Okami.  Marquardt then dropped down to 170, but was released from the UFC after having too much testosterone in his system before a fight.  This ended up being a bit of a misunderstanding, but he was still released and then signed back by Dana White, but for Strikeforce.  He won his only Strikeforce fight to date and now will face Saffiedine in the last Strikeforce fight ever.

Saffiedine is a Belgian who has done well winning his last 3 Strikeforce fights by decision, but he has never fought anyone of Marquardt’s caliber and will likely have his hands full in this one.

Cormier is a beast who has never lost an MMA fight.  He is 10-0 and has won 5 strikeforce fights.  He defeated Antonio Silva, who recently beat Travis Browne in the UFC, via KO and also most recently beat Josh Barnett who is considered one of the top heavyweights in the world.  Strikeforce has always had a strong heavyweight contingency and it will be interesting to see how these fighters do against some of the UFC’s best.  Staring should be easy work for Cormier as he really hasn’t fought anyone even close to his quality in his MMA career.

5Dimes.eu is where you should place your final Strikeforce wagers.  Click here to visit 5Dimes.eu and open an account.  You will then find the odds under ‘Strikeforce’, under the ‘Fighting’ header in the sportsbook.