The Oakland Raiders will be playing their first NFL playoff game in over a decade when they travel to NRG stadium to take on the Houston Texans on Saturday. The game is scheduled to begin at 4:35 PM. ET.

The Raiders were easily the biggest surprise in the NFL this season, and came very close to clinching home field advantage in the playoffs. However, a season ending injury to Pro Bowl quarterback Derek Carr, suffered in week 16, ended their hopes of finishing with the best record in the conference. 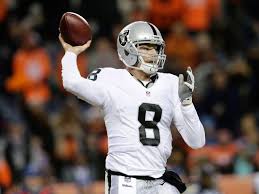 Connor Cook gets the first start of his NFL career in the playoffs. A lot weighs on his shoulders.

Houston thought it solved its quarterback problem when the team signed Brock Osweiler to a big contract in free agency. However, Osweiler proved not to be the answer to their offensive problems, and was eventually benched in favor of Tom Savage toward the end of the season.

Savage played well after being named the team’s starting quarterback, but he suffered a concussion in their team’s final regular season game, and will be watching this game from sidelines as head coach bill O’Brien has named Osweiler the starter for this game.

With a rookie behind center, look for the Raiders to focus more on running the ball, so they don’t have to ask their rookie quarterback to do too much. If the team is successful running the ball, they will take a few shots downfield on play action passes in hopes of getting a big play.

Defensively, the Raiders should be able to put some pressure on Osweiler thanks to their aggressive frontline, which has made life difficult for opposing quarterbacks this season.

The Texans will also be trying to put a lot of pressure on Oakland’s rookie quarterback and force him into making untimely mistakes. Jadeveon Clowney, who has been on a tear this season will be a disruptive force.

In their first meeting of the season, which the Raiders won, Clowney had five tackles but was unable to get to the quarterback. This week, he told reporters that he hopes the coaches call a lot of blitzes because he feels hurrying him up will help the team with favorable field position.

Even without J.J. Watt, who suffered a season ending injury, the Texans still have one of the best defenses in the NFL, and if they are playing well, they will be hard to move the ball against.

Now that Osweiler has the starting job back, the Texans are hoping he will do a better job running the offense after looking bad in a few games this year.

The Texans look like the best bet especially with Oakland Starting a rookie, However, I feel the Raiders defense will make life difficult for Osweiler, which will help them keep the score close. Raiders cover.