The Divisional round of the NFL playoffs start this weekend, and the marquee game on Saturday is between the Atlanta Falcons and Seattle Seahawks. The game will be played at the Georgia Dome, and it’s scheduled to begin at 4:35 PM. ET.

The Seahawks and Falcons met during the regular season in Seattle, and the Seahawks were able to get a controversial win after the referees decided not to call a flag on Richard Sherman after an apparent pass interference in the final seconds of the game. 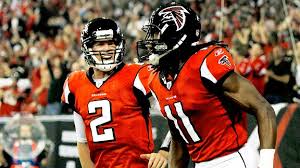 Julio should have no trouble lighting up this Thomas-less Seattle secondary.

At the time, the Seahawks snapped Atlanta’s four-game winning streak and lost only one of their next five games. This time around, the game will be played in Atlanta, where the Falcons will be hoping to extend their winning streak against Seattle in the playoffs to two games.

The Falcons are led by Matt Ryan, who was one of the front runners for the MVP award. Ryan finished with the best statistical season of his career, throwing for 4,944 yards, 38 touchdowns, and only 7 interceptions.

Ryan got a lot of help offensively this season from players like Devonta Freeman, who went over 1,000 rushing yards for the second consecutive season, and added 11 touchdowns on the ground. Julio Jones also showed why he is considered the best receiver in the NFL, finishing with 1,409 receiving yards and 6 touchdowns in 14 games.

The Seahawks have been one of the best teams in the NFL for the past five years, but weren’t as dominant as they have been in recent years.

Russell Wilson, who played behind the worst offensive line he has had since he entered the league, still managed to throw for 4,219 yards and 21 touchdowns. Doug Baldwin emerged as Wilson’s best offensive weapon, finishing the season with a career best 1,128 receiving yards and 7 touchdowns.

Due to the porous offensive line and the retirement of Marshawn Lynch after last season, the Seahawks, who were known for their bruising ground game, were one of the worst rushing teams in the NFL this year, which made it easier for defenses to focus their attention on Wilson.

In their Wild card game against the Detroit Lions, the Seahawks looked very good on offense and defense, but they didn’t face a player they had to game plan specifically for. With the Falcons, the Seahawks have to worry about slowing down Julio Jones, who has burnt their secondary in the past, and forcing Ryan to make mistakes he hasn’t made all year.

For Atlanta, they have to set the tone early by stopping Seattle’s ground game and force Wilson to beat them with his arm.

The Falcons have a tendency to shrink in big games, but I feel they are the better team and will be able to pull off the win at home. Take the spread and the over on points on this one.