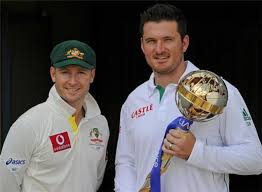 Since South Africa’s readmission to world cricket in 1992, only one Test match played in the country between South Africa and Australia has ended in a draw. This incredible statistic, apart from showing the great rivalry between these two sides, adds a little extra to the mix as these two sides come into the deciding Test at Newlands on Saturday. The first two Tests ended in comprehensive victories for each side, and with Newlands as a backdrop, the final Test promises to be a cracker.

Bet365.com is the best place to bet on the deciding Test between South Africa and Australia, offering you a wide array of match selections and markets, including exciting in play options that you can have a punt on as the games progress. Below we look at some of the most popular bets that Bet365.com has to offer.

The last time Australia (2/1) visited South Africa (13/10), they capitulated to 47 all at Newlands as the series was drawn, and the Aussies, whose team still consists of several men who comprised the side that fell in a heap that day, will have to excise those memories from their minds if they are to claim the series. A result ground, South Africa have a very good record at Newlands, and riding on the enthusiasm of their victory in the second Test, must be confident of their chances.

Few changes are expected for the game, with Australia looking to bring back almost fit-again all-rounder Shane Watson to the side. Watson will not play if he’s not ready to bowl, though, as captain Michael Clarke has indicated on more than one occasion. A late call will be made on the all-rounder’s inclusion for the last Test. Australia are also sweating on the availability of fast bowler Ryan Harris. Playing second fiddle to the amazing form shown by Mitchell Johnson since the start of the Ashes this summer, Harris has struggled for wickets, but remains one of the most important cogs in the Aussie side’s armoury. If his knee is deemed not fit for Test duty, young paceman James Pattinson or Jackson Bird will be ready to be called up to action.

South Africa made three changes after the first Test, all successful, but they will in all likelihood be forced to make more changes after Wayne Parnell pulled up lame at Port Elizabeth. They will have to decide whether to bring back spinner Robin Peterson to the side or to return to the all-rounder Ryan McLaren. With Newlands traditionally a true pitch, they may opt for the all-pace attack that gave them success in PE, relying on the part-time spin options of Dean Elgar – who is also a selection headache for the Protea selectors after a good performance as opener in place of fit-again Alviro Petersen – and JP Duminy.

Hashim Amla, whose second innings century swayed the game into the South African’s favour in PE, is favourite to top score for his country again at 3/1, equal with AB de Villiers, the world’s number one batsman, who beat the world record of most consecutive Tests with a half-century score, bringing that total to 13. His chances of taking that to 14 are pretty good, considering the type of form he’s in, and a pick of the favourites in this market is not a bad option. Other options include Captain Graham Smith (9/2), who has been in poor form of late, and Faf du Plessis (11/2). Duminy, another centurion in PE, is at 13/2.

From an Aussie perspective, Dave Warner, fresh from a fine for his comments regarding the tactics employed by the South African’s in order to get the ball to reverse in the second innings in PE, has been one of their form batsman this tour, collecting a century and two 50’s in his four outings to the crease, tops the charts with 10/3, but look out for Clarke (7/2), who is currently in the worst slump of his career and due a few.

The game in PE turned on the South African bowling attack’s ability to purchase reverse swing from the ball in the deciding second innings, and the third Test may sway on whether either side can capitalize on this phenomenon. Johnson, the difference between the two sides in the first Test, where he took 12 wickets in the game, was a little less effective in at St. George’s, but with the Cape Town pitch usually playing a lot evenly than the relatively slow PE wicket, he will be expected to spearhead the Aussies to victory once again. A lot will depend on South Africa’s ability to combat Johnson once again, but with Cape Town being one of the Proteas’ favourite grounds, and the ghosts of 47 all out haunting the oval, the South Africans, though marginally, must enter the game as favourites. With these two sides, however, it will take a brave man to make that call.

Bet365.com is the place to go for all cricket betting. There you will find the best odds when it comes to South Africa vs Australia markets as well as in-play options to play as the action unfolds.

Click here to keep up with the latest news and scores from Cape Town.