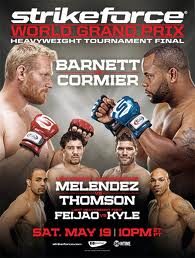 The Strikeforce Grand Prix heavyweight tournament final will take place this Saturday, May 19th at 10pm EST and will be televised on Showtime TV.  Daniel Cormier and Josh Barnett will battle it out in the ring for the right to call themselves the Strikeforce heavyweight champion of the world!

The Strikeforce Heavyweight Grand Prix tournament began almost a year ago back in June, 2011 with the quarterfinals where Josh Barnett defeated Brett Rogers via an arm-triangle choke in the 2nd round.  In the semi-finals Barnett matched up against Russia, Sergei Kharitonov, who defeated Andrei Arlovski in his first round match.  Barnett was able to game the same submission (arm-triangle choke) against Kharitonov, but in the first round.

Daniel Cormier wasn’t in the original 8 selected to participate in the Strikeforce Heavyweight Grand Prix, but came in as a substitute for Alistair Overeem in the semi-finals and pulled off the upset with a knockout of Antonio Silva in the first round.

Josh Barnett is currently ranked #8 in the world according to Sherdog.com’s Heavyweight Rankings, while Daniel Cormier is ranked #9.  It’s anyone’s guess as to who is the better of these fighters, which is why the odds are almost even for betting on this Cormier vs Barnett fight.  I have checked all of our top rated online sportsbooks and have found that 5Dimes.com offers the best odds and most betting options for this fight.  Visit 5Dimes.com to bet on the Strikeforce Heavyweight Finals now.

5Dimes.com currently has two lines up for this fight.  The first line is simply the money line wager of who will win the fight:

The other line that 5Dimes.com has available is a prop bet on whether or not this fight will go the distance:

The +200 means that if you bet $100 you would win $200 if the fight went the distance.  As you can see the fight is expected to be finished before the 5th round.  Of the 6 fights that have already taken place in the Strikeforce Heavyweight Grand Prix 5 of them have been finished in the first two rounds and Cormier/Barnett have finished fights in the first round twice and in the second round once with none going the distance.

How To Bet On Daniel Cormier vs Josh Barnett

As mentioned earlier I highly recommend betting on this fight at 5Dimes.com.  5Dimes is one of the most recognized sportsbooks online, they almost always offer the best odds with reduced juice and they offer two great lines for this fight.  If you use 5Dimes marketing code AF0002879 you will also receive a sign up bonus up to $520.

The first step in betting on Cormier vs Barnett is opening an account at 5Dimes.com.  Visit 5Dimes and click on the “Register Today!” button in the right sidebar.  You will then be taken to a short form that you will need to fill out to open an account.

Now that you have opened an account you will need to make a deposit in order to have money with which to bet on Strikeforce.  Head to the ‘cashier’ section of the site and choose one of the many deposit methods to fund your account.

Once you have money in your account you are ready to bet.  To find the Cormier vs Barnett lines click on the Strikeforce and Props boxes under the ‘Fighting’ heading the sportsbook.  This will take you to the Cormier vs Barnett betting lines where you can place your bets.  Then sit back and watch an exciting heavyweight tilt on Saturday night.

Visit the Strikeforce website to learn more about the event and the fighters.