Bet On The 2012 Heisman Trophy Winner 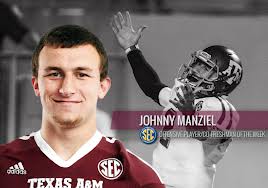 The college football regular season has come to a close and the majority of teams (except for Army and Navy) are either done for the year or preparing for their respective Bowl Game.  The only college football news being decided this weekend, other than the Army-Navy game is which talented player will win the 2012 Heisman Trophy as the most outstanding player in college football.

Online sportsbook Bovada.lv has lines available for you to bet on which of the three nominees will win the trophy this year.  If you are Canadian then Bodog.ca is where you would have to wager.  These are two of the best betting sites for college football wagering online.

As you can see Manziel is an overwhelming favorite to win the award, while Te’O is being given an outside chance and Klein is basically being considered as just a QB to fill out the third nomination spot.  But let’s look at what each player has done this year:

Johnny Manziel is the massive favorite to win this award and will likely become the first freshman ever to win the Heisman.  He is a dual-threat quarterback who can beat defenses both with this feet and his arm.  This is very similar to past Heisman winners Tim Tebow, Cam Newton and RG3.

Manziel passed for an average of 284.9 yards per game, had a passer rating of 155.85, passed for 24 touchdowns, rushed for an average of 98.42 yards per game and had 19 rushing touchdowns.  As you can see these are remarkable numbers.  Texas A&M finished the season with a 10-2 record, good enough for the #9 rank in the country.  They will be playing Oklahoma in the Cotton Bowl in January.

It is rare for a defensive player to get a nomination for the Heisman Trophy, but Notre Dame’s Manti Te’O has done just that. He helped lead Notre Dame to a perfect season thusfar and the number 1 ranking in college football. He will be competing in the BCS National Championship Game in January. Te’O has 103 tackles this season, 7 interceptions and 1.5 sacks. Just ridiculous numbers for a linebacker. If Te’O wins the award it will be deserved. It could help that some voters don’t like the fact that Manziel is a freshman.

Collin Klein really doesn’t have a shot at winning the Heisman. His numbers just aren’t amazing enough and simply don’t compare to Manziel’s. His only chance is if voters really go against Manziel for being a freshman, but still want to give the award to an offensive player.

How To Bet On Heisman Trophy Winner

Click here to visit Bovada.lv and open a new account (Bodog.ca if you are Canadian). After making your first deposit you will have some money with which to put down on who you think will take the hardware.

Click on ‘college football’ in the left sidebar and then click on ‘college player props’ in the drop-down menu. Make your selection and then wait for the winner to be announced this coming Saturday!