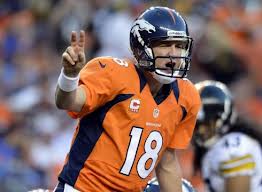 We are half way through the NFL season and it’s not just the playoff races that are heating up.  The races for individual awards are also in full swing with certain players having made a case for themselves as MVP to this point in the season.  Online sportsbook Bovada.lv (Bodog.ca for Canadians) has a prop bet available where you can wager on which player will win the regular season MVP award this season.  Of course the 5 favorites according to the odds are all QB’s with Arian Foster the next closest contender.

Here are the odds for the top 10 favorites to win the NFL regular season MVP heading into week 10.  These odds were found at Bovada.lv:

The big favorites are Peyton Manning and Matt Ryan. Peyton came back after missing last season due to injury and has lead the Denver offense amazingly. He got off to a bit of a rocky start throwing 3 picks in his second game of the season, coincidentally against Ryan’s Falcons, but he has came on strong since then and currently has the best QB rating in the league 108.6 and the third most TD’s at 20. Plus you have to factor in Peyton’s reputation which always creeps into award selections even if it shouldn’t. Ryan on the other hand has the only 8-0 record in the league and if he can continue to put up wins he has to get the nod. Looking at Atlanta’s schedule it is entirely possible they continue their winning ways also.

Drew Brees at 15/1 is another interesting proposition. He has the second most yards and TD’s in the league, but his team is only 3-5 after losing 4 games to start the season. If he can somehow get the Saints into the playoffs after that start he will be a top candidate for the award. The Saints do have a very difficult schedule though with the Falcons x2, 49ers and Giants all coming up within the next 5 weeks. After those games the Saints will either still have a shot or be completely done for the playoffs.

An interesting pick would be Doug Martin at 50/1. Last week Martin went off for 4 touchdowns and 251 yards. He has been on fire in the last few weeks and if can continue that pace he has an outside shot at the MVP. Especially if he is able to get the Bucs into the playoffs. He has the most fantasy points for all RB at this point in the season which is telling.

There are a lot of good players who are in a position to win the MVP award.

If you want to bet you should click here to visit Bovada.lv and open an account.  After you make your first deposit you will find the odds under the NFL Player Props tab.  The odds will change as the weeks past and players have big or poor performances.  If you think a player is primed to have a good second half you should bet on them now to get the good odds as you watch them dominate the second half of the NFL regular season.