Bet On The 2013 Madrid Masters 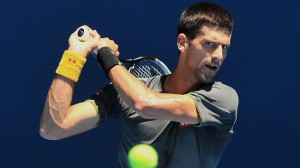 With the French Open just three weeks away, the best male tennis players in the world come together at the same clay court event for the first time this year at the Madrid Masters. World number one Novak Djokovic is joined in Madrid by home favourite Rafael Nadal as well as Roger Federer and Andy Murray in what will be a good indicator of how the leading players in the world are shaping up leading up to the mid-year Major season.

(The odds for the tournament have not yet been made available, but we advise you to visit Bet365.com to place your bets on the event and for any future tennis betting event. Bet365.com will be offering live play-by-play betting on the Madrid Masters, as well as tournament odds and more.)

After the criticism levelled against the blue clay that was trialed at the event last year and subsequently banned by the ATP, the tournament returns to the more traditional red clay. Both Djokovic and Nadal will be pleased to hear this change, as they were among the most outspoken against the use of the blue clay last season.

Djokovic has been on top form in recent weeks, eclipsing Nadal in Monte Carlo two weeks ago, bringing an end to the Spaniard’s eight-year winning run in the principality. Following that performance, the Serb is being tipped to complete his career Grand Slam and go on to win the French Open. How he goes at the Madrid Masters will be a good indicator as to how far he can go at Roland Garros.

Nadal recovered from his defeat in Monte Carlo by getting back to winning ways in Barcelona last week. However, with he will be coming up against much sterner competition in Madrid as he seeks to win the tournament for the third time.

Last year’s winner, and perennial favourite, Roger Federer, who won the title for the third time last year, always puts out a good performance in the Spanish capital, and will be expected to do so again this time out. The Swiss maestro must be in the closing stages of his illustrious career, but he can never be counted out. With Federer looking to extend his record majors haul in the coming months at Roland Garros and Wimbledon, the Madrid Masters will be an ideal opportunity to kick start his form into a higher gear.

Bet365.com is the ideal sportsbook to have a bet on the 2013 Madrid Masters. There you will find the best odds for the tournament, and will be able to play as the matches and the tournament progress.

Check out the Madrid Masters official website to keep up with the event.

May 3, 2013 Daniele Polizzi Tennis No Comments