Bet On The 2015 Preakness Stakes – Odds and Picks 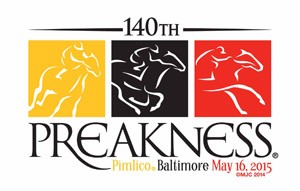 The Kentucky Derby went pretty much as expected with American Pharaoh taking down the race as a fairly big favourite.  Dortmund, the second favourite, finished in third, while Firing Line, who was listed at 14/1 as the 7th favourite pulled off the second place finish.

After a strong horse wins the Kentucky Derby it always makes the 2015 Preakness that much more interesting, as we wait to see if there will be a potential Triple Crown win heading into the Belmont Stakes.  In two of the last three years, we’ve been lucky enough to see the same horse follow up their Derby win with a Preakness Stakes victory, which set up very exciting Belmont Stakes races.  But even though we’ve been lucky with strong horses lately, this isn’t exactly the norm.

In the last 10 years there has only been 3 occasions that the Kentucky Derby winner followed up with a Preakness Stakes win.  That said, if you continue back 3 more years, then 6 of the last 13 horses have pulled off the feat, so although it’s difficult, it is very doable because the Preakness and Derby have similar distances and although their are some differences, the same type of horse can usually perform well at both of these races.

Here’s a look at the 2015 Kentucky Derby again to see how the horses responded:

Now, let’s take a look at the early Preakness Stakes with a week and couple days left before the second Triple Crown race takes place.

These odds are taken from Bovada.lv, which is our top rated sportsbook for betting on the Preakness Stakes.

American Pharaoh is once again the favourite, while his stablemate, Dortmund, is now the third favourite, with just slightly longer odds than Firing Line.

All three of these horses got off to unimpeded starts in the Kentucky Derby, which will also be very key at the Preakness Stakes race, which is slightly shorter and with the tight corners it is also a bit harder to come from behind.

If American Pharaoh can again get a decent start I think this is his race for the taking.  Dortmund seemed to fade a bit at the end, which may mean he has a better chance at the slightly shorter Preakness, but you can’t get a much better start than Dortmund and he was on the rail the entire way, but was still caught at the end by both American Pharaoh and Firing Line.  I see Dortmund once again coming up short against American Pharaoh.

American Pharaoh can win in a lot of ways, which is why he’s again my pick to win the Preakness Stakes.  I also very much enjoy having a horse with the ability to win the Triple Crown heading into betting on the Belmont Stakes, so I will be cheering for American Pharaoh already.

Click here to visit Bovada.lv and place your bet on the 2015 Preakness Stakes…..