Bet On The Australia Tour To India 2013 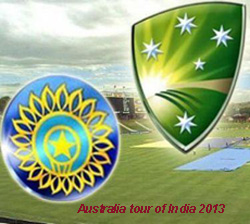 Australia head to Chennai for the start of the Border-Gavaskar Trophy this week without the presence of either Ricky Ponting or Michael Hussey in their squad for the first time in about a decade and a half. It has been a difficult summer for the Aussies, with the loss of their most experienced batsmen coming at the back end of a couple of months in which they fell at home to South Africa before comfortably seeing off Sri Lanka, as well as controversy around a rather confused and confusing rotation policy with regard to their fast bowlers. India themselves are reeling from the retirement of batting stalwarts over the last twelve month period, and following a 2-1 home defeat at the hands of England at the end of last year, will be adamant to keep their growing amount of detractors at bay with a more professional showing against Australia over the next month.

We look at the series odds and what opportunities they provide. The odds referenced are from Bet365.com, the most reliable sportsbook for betting on cricket online. All of these betting options, as well as many more markets will be available on the site.

The last time these two sides met in a test series, Australia romped to a 4-0 whitewash on home soil. Home advantage means India will enter the series as favourites, and the relative inexperience of the Australian side, especially in the subcontinent, seems to support the odds given. However, India will have been the favourites against England, too. A lot will depend on how the Australian batsmen cope with the spinning tracks that will be prepared for them. India is expected to start the first test with three spinners, and Australian coach Mickey Arthur has stated that they will look to play them positively. Only time will tell.

England’s success came as a result of their batsmen surviving, then dominating, India’s spin attack, coupled with India’s batting order’s own frailties against spin. But whereas England had options in Graeme Swann and Monty Panesar, Nathan Lyon is the only Aussie tweaker picked for the first two tests, a proposition that won’t be keeping many of India’s batsmen awake in the nights preceding this first test.

Che Pujara was comfortably the best Indian batsmen in the England series, and will be confident going into this encounter.  Virat Kohli was one of the leading scorers in all cricket last year, but disappointed in his last series, and with the pressure on Sachin Tendulkar to announce his retirement mounting following a barren run in test cricket over the last few years (his last century came in Cape Town in January 2011), you feel that Tendulkar will have to perform over the next month against an opponent he has traditionally done well against.

For Australia, it is difficult to look past Michael Clarke to be his side’s top run scorer. Since taking on the captaincy, Clarke has been in near Bradmanesque form, and being the player with the most experience in the subcontinent in his side at this level, Clarke will have to continue his good form for Australia to have a crack at the series. Shane Watson slots in at number four in the order, and will only be used as a batsman in this series in an attempt to prevent injury ahead of the Ashes series later this year.

Harbhajan Singh was recalled to the Indian side against England and didn’t really come up with the goods, but retains his spot arguably on the strength of his past record against Australia at home. He has taken 81 wickets at an average of 24.48 in twelve tests against the Aussies, and will look to draw inspiration from those numbers. Ohja was the best of the Indian bowlers against England, taking 20 wickets, followed by Ashwin with 14. Their leading wicket taker for the series is again likely to come from this pair.

It is becoming increasingly difficult to predict Australia’s bowling line up over the last year or so following their increasingly controversial rotation policy. Mitchell Starc and James Pattinson have looked the most threatening of Australia’s bowlers in recent times, when they have played, and Peter Siddle is always good for a few wickets. Nathan Lyon, in being the only recognised spin bowler selected for this first test, will likely be relied upon to carry a heavy workload for his team, and if he can get some assistance from the track, some wickets will be on offer for him.

Australia go into the first test with four quicks – Siddle, Starc, Pattinson and all-rounder debutant Moises Enriques – with Nathan Lyon as the only spinner, whereas India have dropped long-standing opening batsman Gautam Ghambir following a prolonged poor run of form over the last few years. Murali Vijay will most likely take his place.

Bet365.com is the ideal sportsbook to place your bets on Australia’s tour to India. You will find the best odds there, as well as for any future cricket betting events. Open an account with Bet365.com to start playing and start winning.

Go here to keep up to date with the latest developments in the series.